On the verge of new discoveries. Underground Abkhazia.

A slight shiver ran down my spine. Again these tunnels, by God, well guys, I came here cheap khachapuri to eat and swim in the sea! - Shh! Arthur hissed. “We decided to eat Khachapuri tonight, and you’ll have time to go to sea!” Hang around here for a week. - Yes, these tunnels of yours are already sick of me, are you not satisfied with the metro in Moscow? - Yes, calm down already, I answer you, you have never seen this! Silence hung in the air. It's not that our protagonist doesn't like adventure. It's just that, with his set of phobias, only go through the dark abandoned tunnels and jump aside. 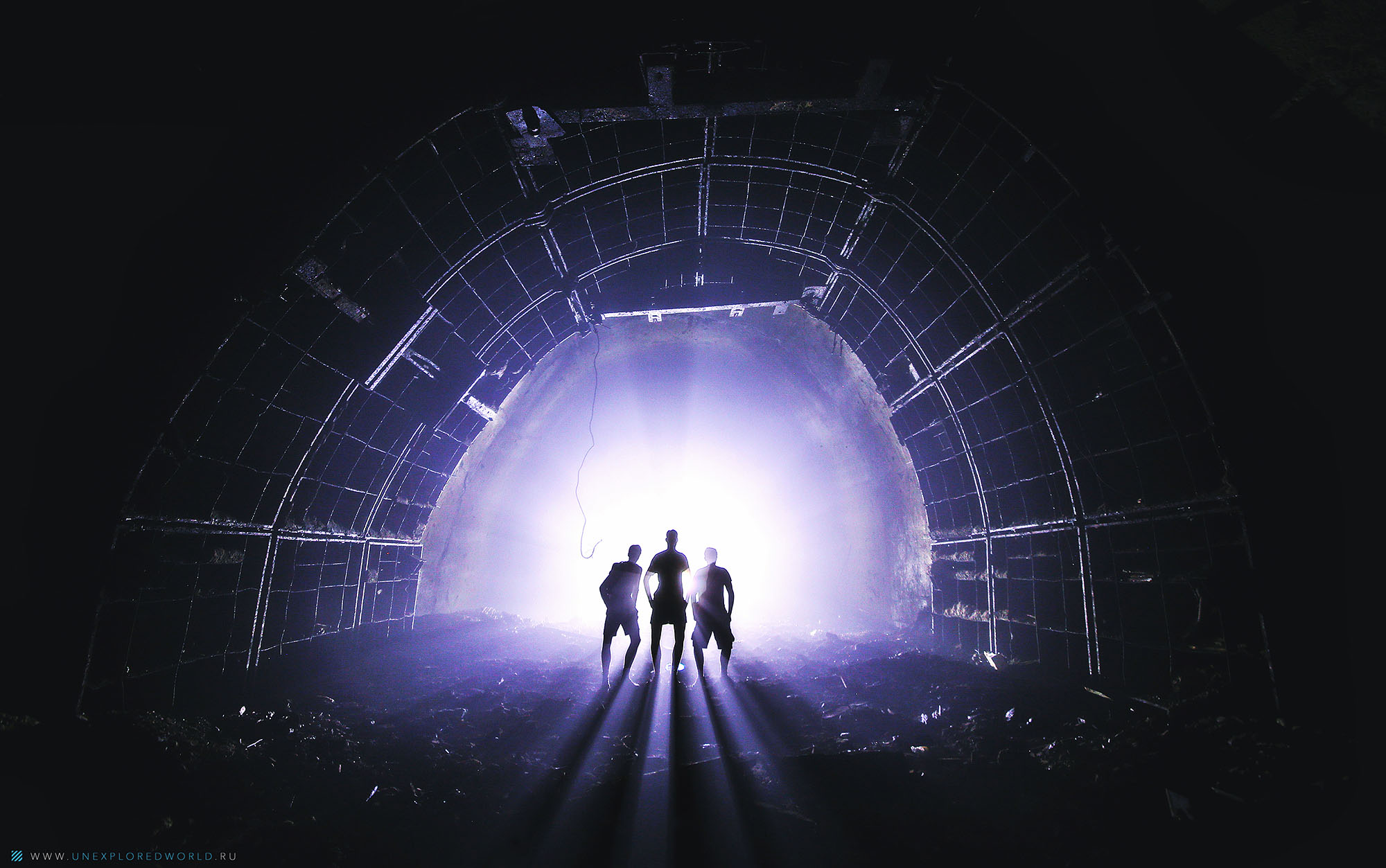 There were three guys. They came to Abkhazia just to rest. Everything is according to the classics: a luxury cottage on the seashore (in fact, it is an unauthorized building, and with great doubt - an official one), a warm sea (with an endless bunch of tourists) and delicious food (in a nearby restaurant ... in a dining room). No wonder that such a resort simply had to be diluted with something interesting, in addition to the monkey nursery, of course. And so it happened.

Come on, the opera house, Mark, tell him! - What? - That there is no nifig! Why did Arthur come up with the idea to look for abandoned tunnels in a mountain fifty meters from the seashore? No one will build tunnels so close to the sea, they will be flooded! Let's go better and better in the sea and swim until the sun goes down!

Mark shouted to Arthur hiding in the nettle thicket - Is there anything there? Arthur! - After 2 minutes of anxious waiting under the scorching sun, he appeared from the bushes. His vid was obscene and obscene. “I don’t understand. The entrance should be here. - grumbled Arthur. After sunset, we ate khachapuri and went to bed.

The next morning Arthur got up before Mark and I. Attempts to wake us up with a proposal to go for a walk through the nearby operating railway tunnel were in vain. The sleepy guys had hundreds of arguments against this idea, so he left alone. I finally woke up an hour later. The sun has not yet warmed up the air and the sea so much that I would not hesitate to climb entirely into the water, therefore, after standing for 5 minutes in the water near the shore, and enjoying the spectacle of the noisy waves breaking on my feet, I went to the store to buy something devour. I was already sick of the dining room.

After another 20 minutes, Arthur returned. I have not seen such a smug face on him since we once got out of the service line of the metro under the auspices of Prytyalov, and saw how many different services came to pull us out of the ill-fated tunnel. Arthur, what the hell, why did you wake us up, and then left somewhere alone? I asked. - Damn guys, there is such a long tunnel! I didn't go through it all, the flashlight began to discharge. Did you take a picture of him together? - Oh, to hell with you, they drove - I replied. 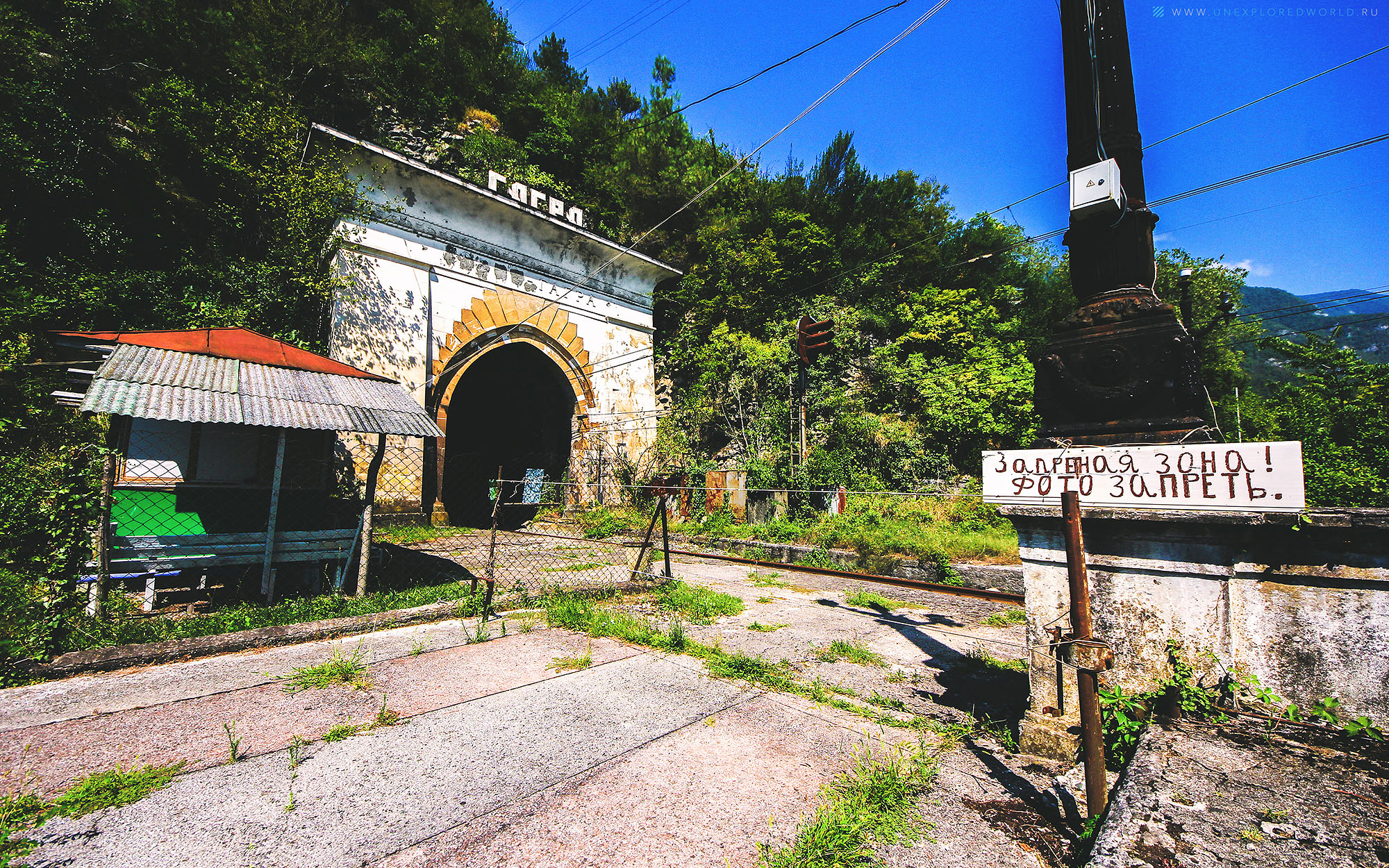 No, well, if it’s "the photo is banned." Before entering the portal, we looked into the booth and made sure that there was no one there. However, what else could be expected? After hesitating for half a minute, the three friends disappeared into the darkness of the tunnel. 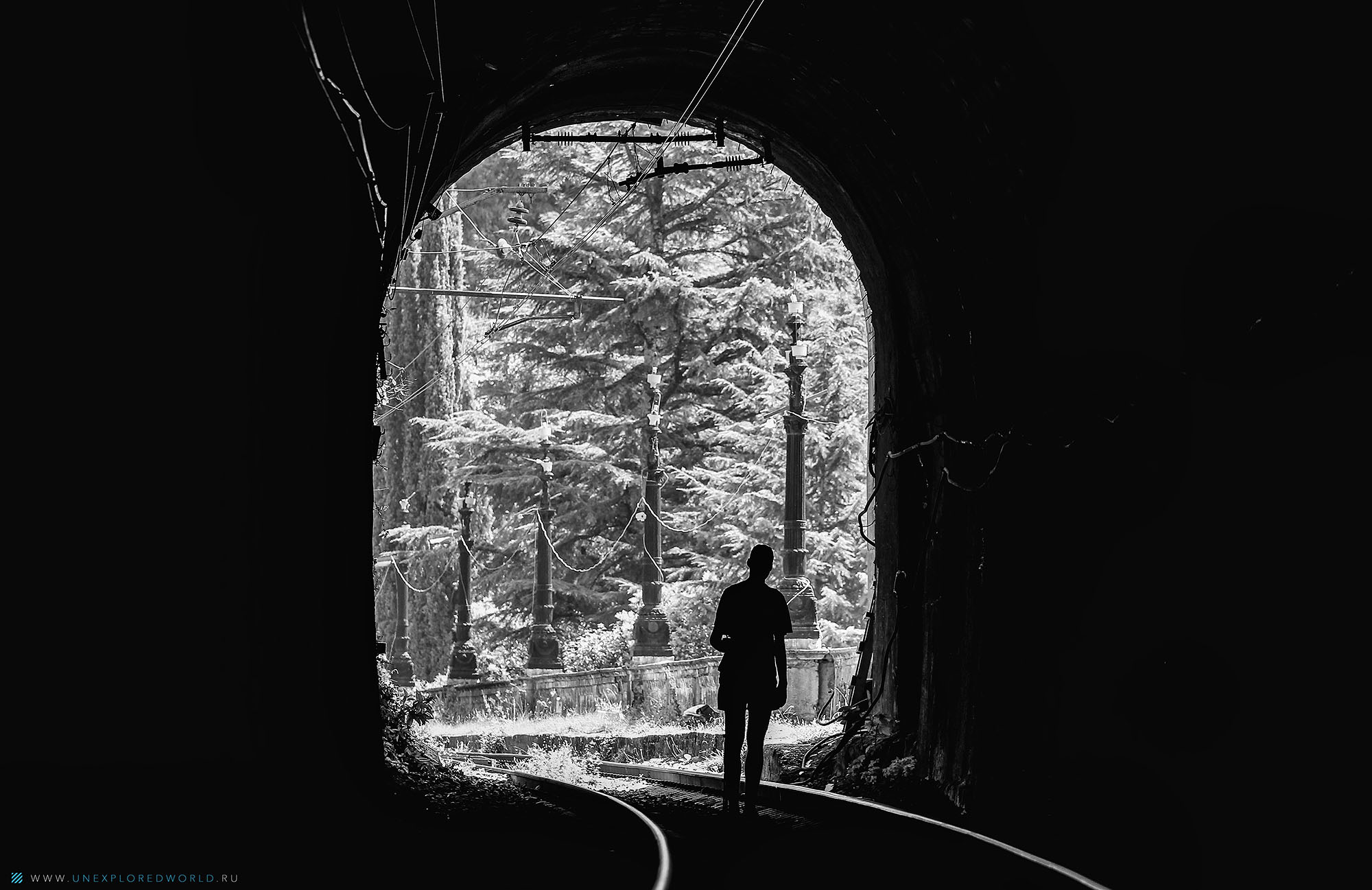 It's different in the tunnels. They lose the sense of space, and time flows in a different way. They can be said to act on you like a sensory deprivation chamber, a device that isolates you from your sense of your surroundings. Absolute darkness, dead silence and emptiness. 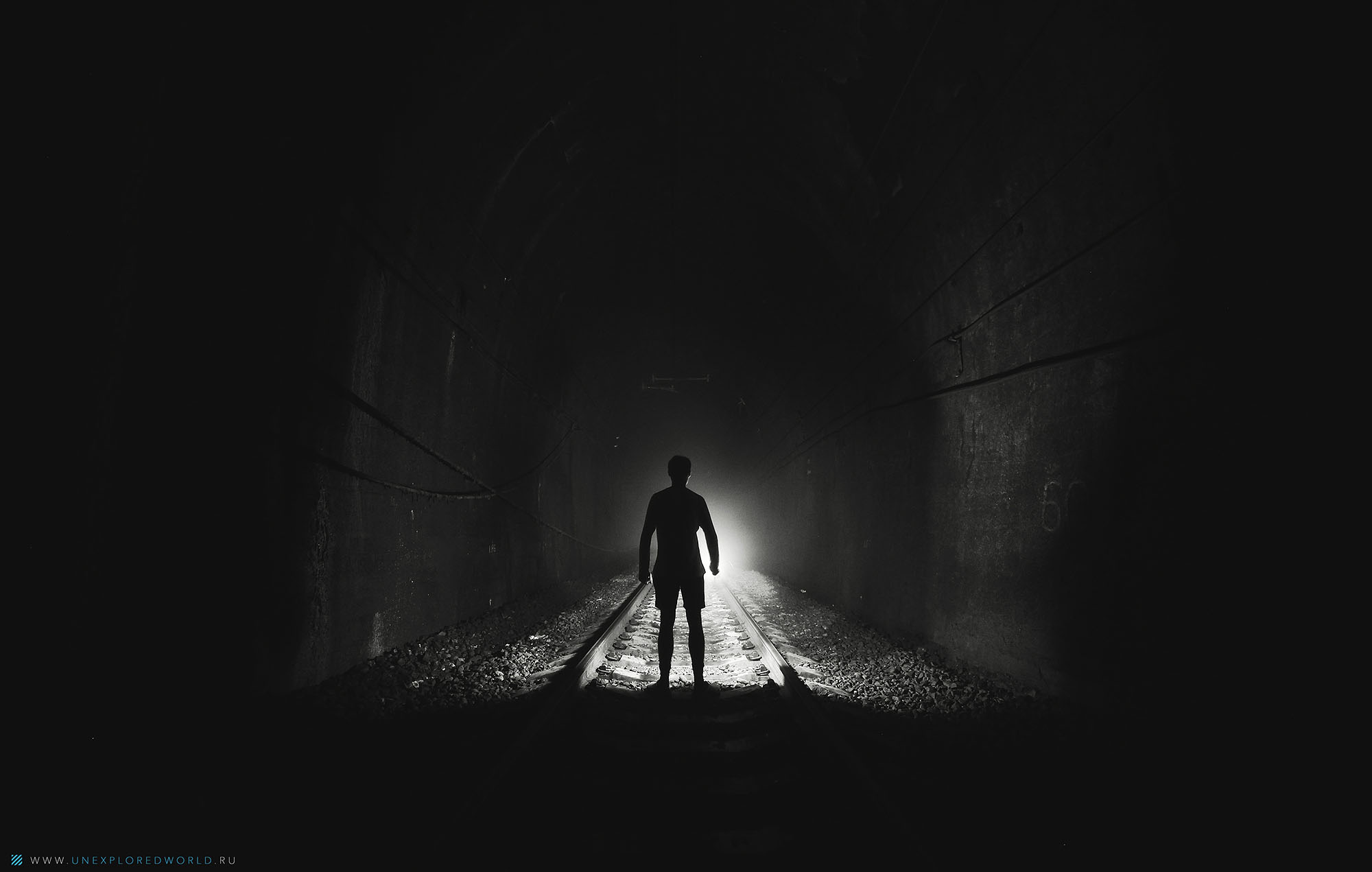 However, in those photographs that we are used to seeing on the Internet, this is not felt. Thanks to the long exposure and flashlights, the tunnel can be illuminated so that it becomes light and textured. 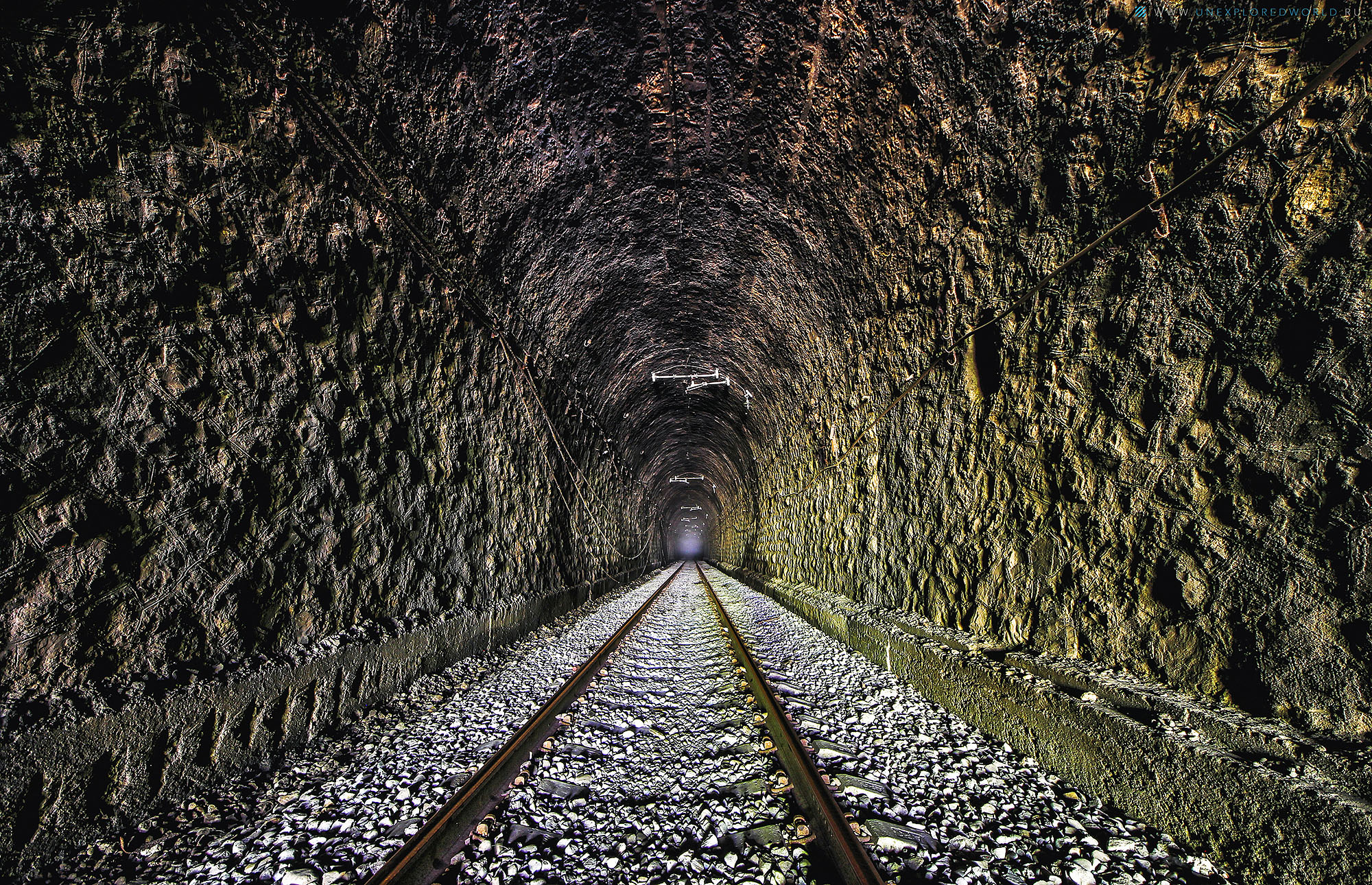 When we walked through the tunnel, we were completely concentrated on stepping over the sleepers. Arthur - I turned to a friend walking in front - Arthur! I shouted at him. - Yes? - What is this sound? A barely audible rumble was heard in the tunnel, like the rumble of a mountain river hidden behind the trees. - God knows, - answered Arthur. I can't imagine how many seconds have passed since, but what happened next impressed me much more than much that happened to us earlier.

A trick impudently stolen from the west: 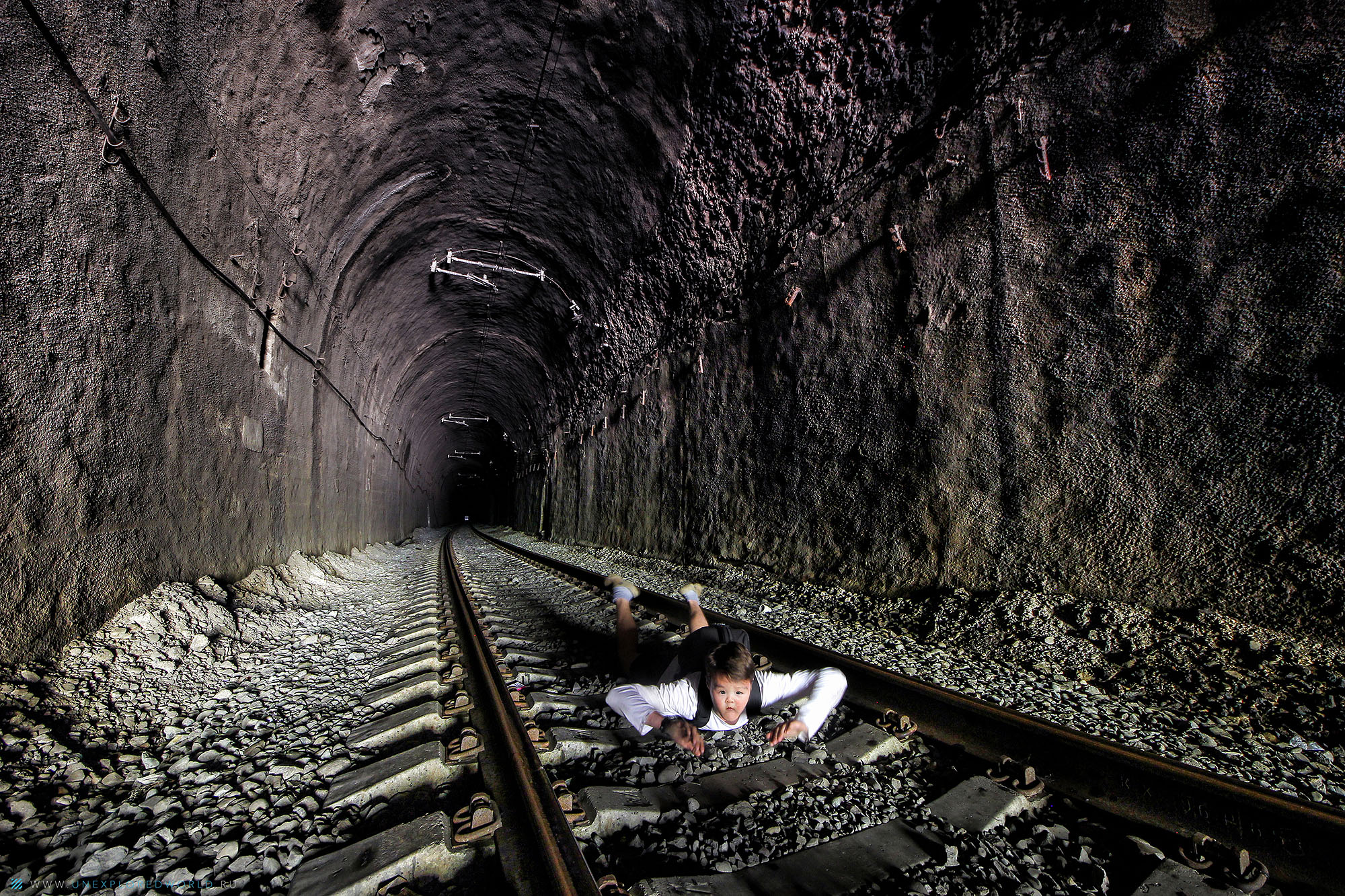 In addition to the approaching noise of water from an incomprehensible side, a second sound appeared in the tunnel ... Right from under our feet. It was a strange "trembling" ringing, similar to a whistle and a creak at the same time. The source of this sound was the rails. Until the very last moment, Mark and I did not understand what was happening. After two seconds of intently studying one of the rails, Arthur turned sharply to us, and, gazing out at the roll-out, ordered us to run after him, and then rushed headlong into the depths of the tunnel. He looked completely dumbfounded, and we ran after him. Not so much from being scared. Rather, to ask what this bullshit is all about. - Arthur! Stop! Wait for us! - shouted Mark. Arthur stopped for a second, turned to us, and shouted: "Run!" His intonation was such that he did not want to argue. A moment later, a light began to appear in the tunnel. 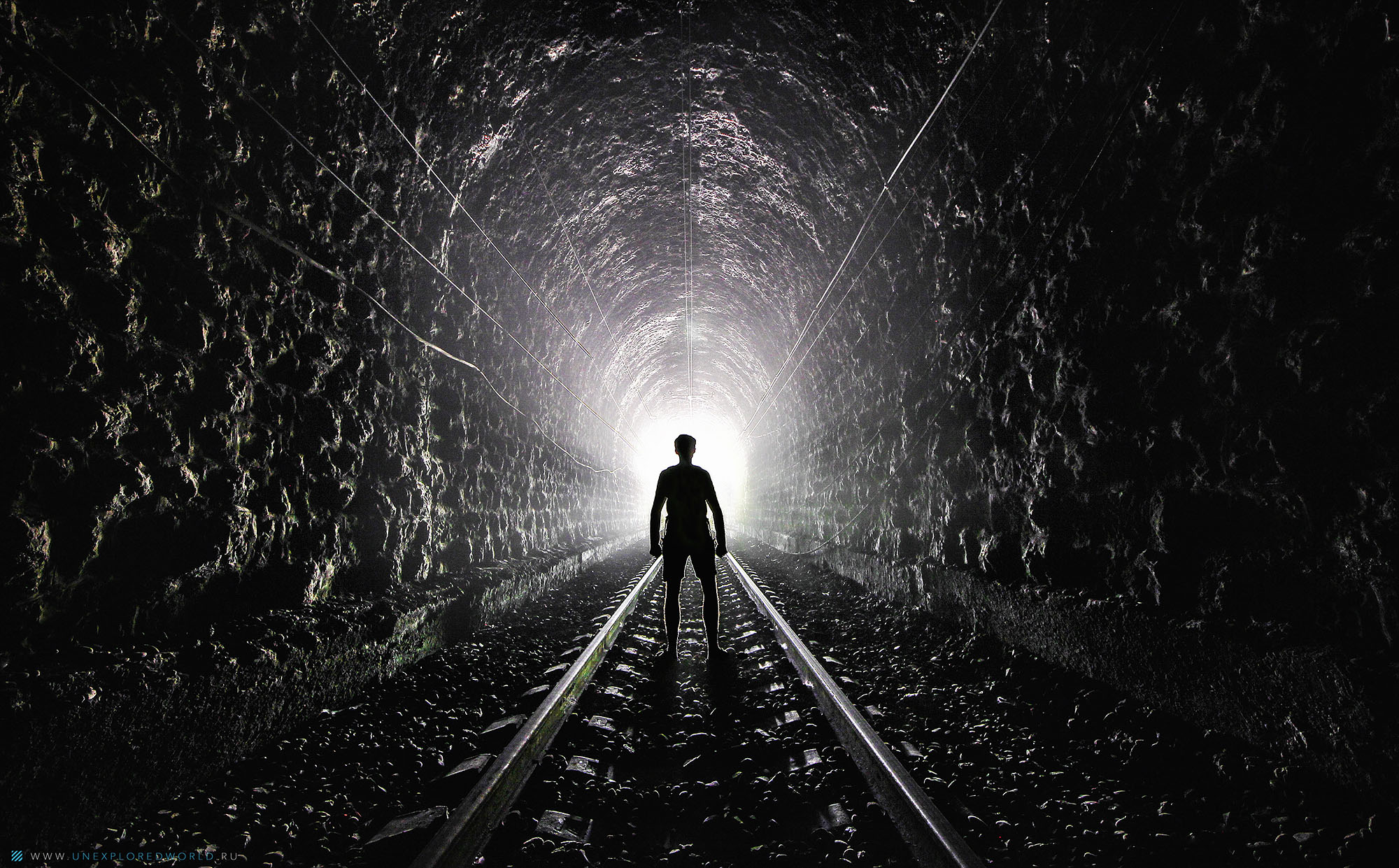 The last one to fly into the crossbar was Mark. She was on the left side of the tunnel about fifty meters from the place from which we fell. I don’t remember when I still ran the fifty-meter so quickly, although in a summer town I was the first at short distances. Five seconds later, after all of us had disappeared into a hole in the tunnel, a train overtook us. He swept past the glitch at great speed and disappeared into the depths of the tunnel. Carried away. 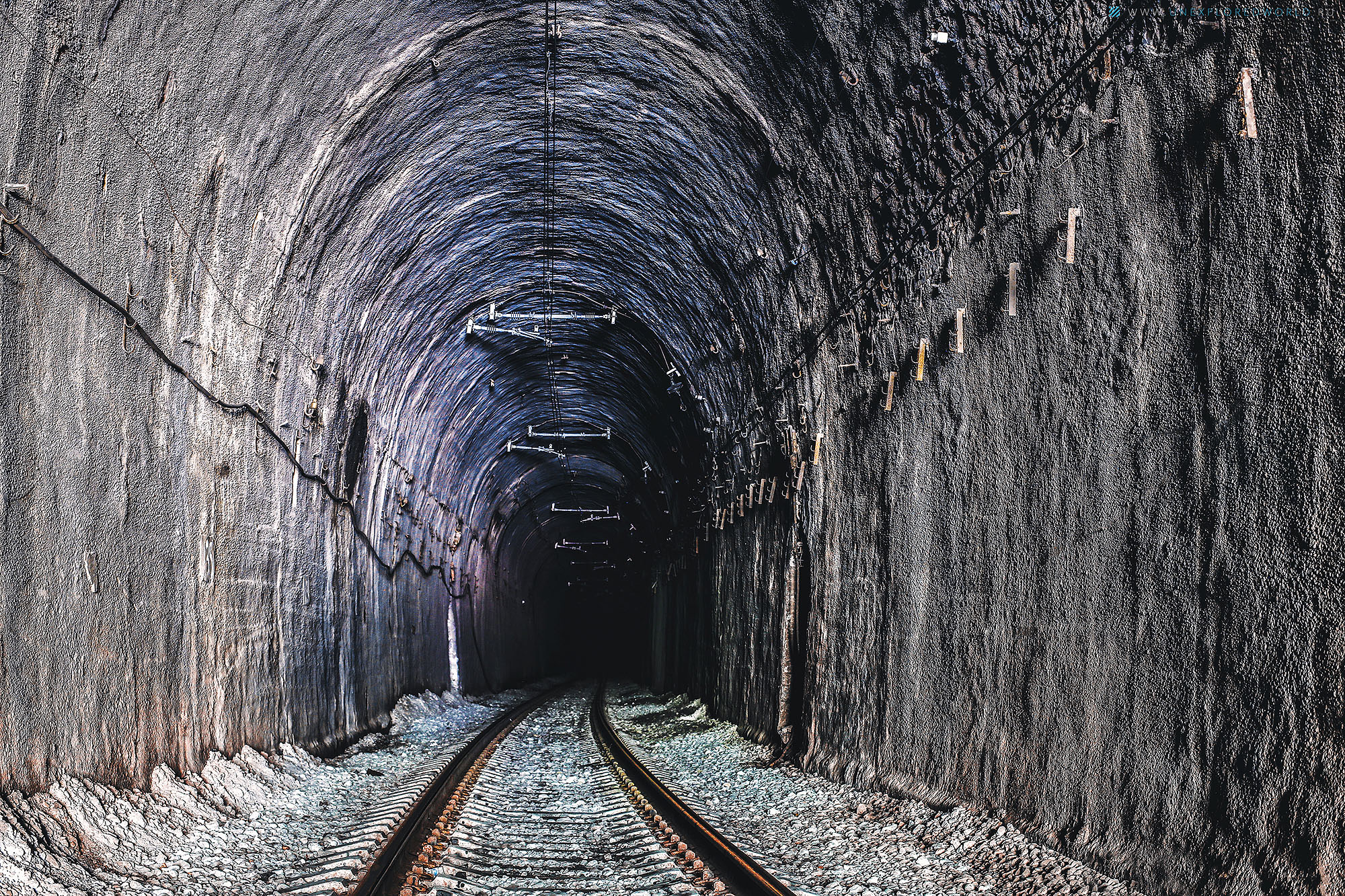 Yes, this tunnel is not rich in failures - Mark interrupted us - Let's go further, or something. Having come to our senses and drank water, we continued on our way. There shouldn't be more trains here. An attentive reader will see in the following photo a Rolton packaging thrown out by someone: 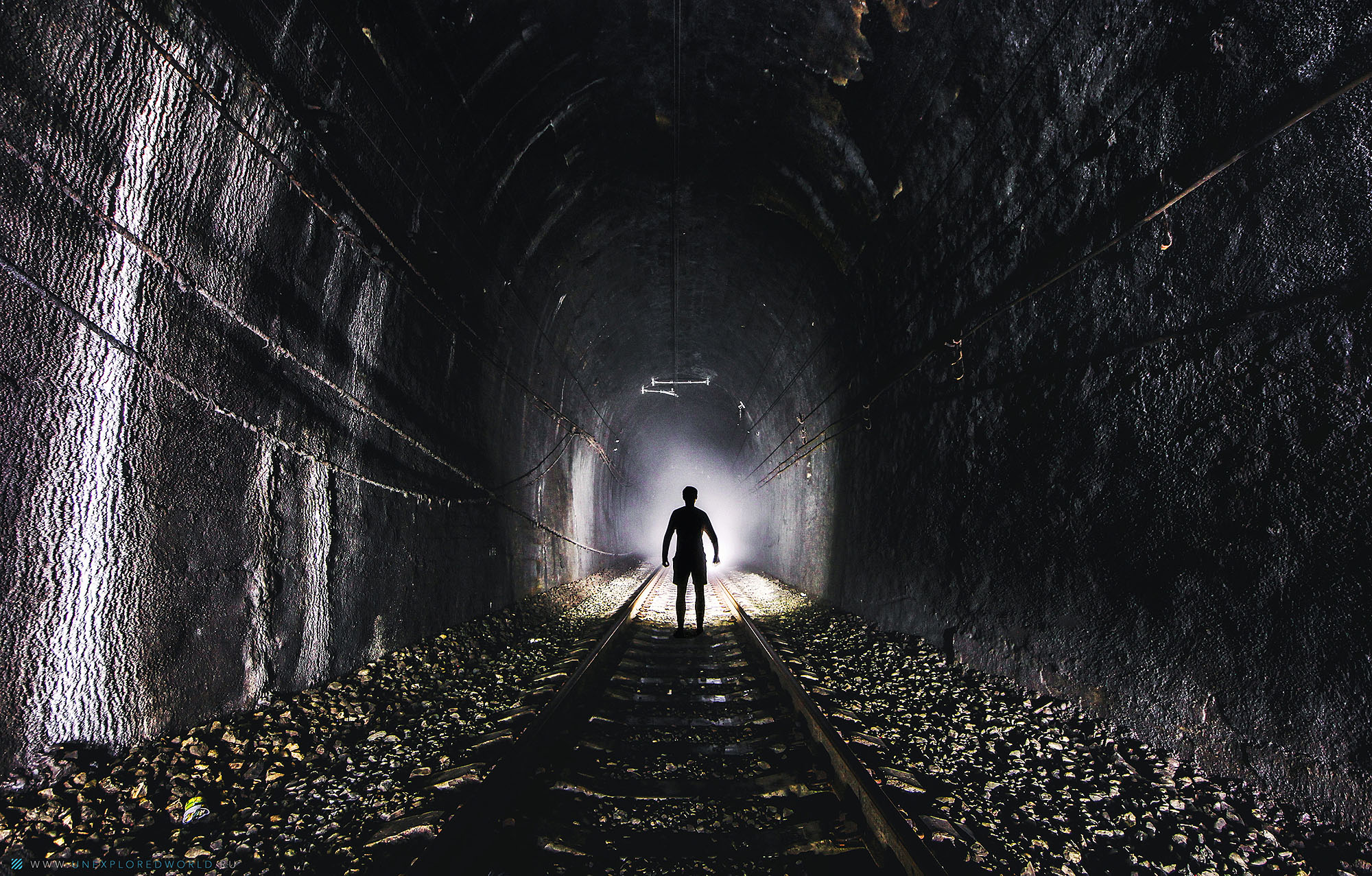 I used to believe in karma. Whenever something dumb happens, after a while something equally cool falls on you. The tunnel we walked through was more boring and monotonous. One glitch changed everything.

Behind it is exactly the same tunnel as the one in which we were, only completely abandoned. We could not imagine that such a thing is possible at all. At the same time, we were at a loss as to why an identical abandoned tunnel runs parallel to the current one. Arthur said that the abandoned one was built earlier than the current one, but something was wrong with its routing, so the construction site was abandoned and another tunnel was erected nearby. I don’t know if it really was. 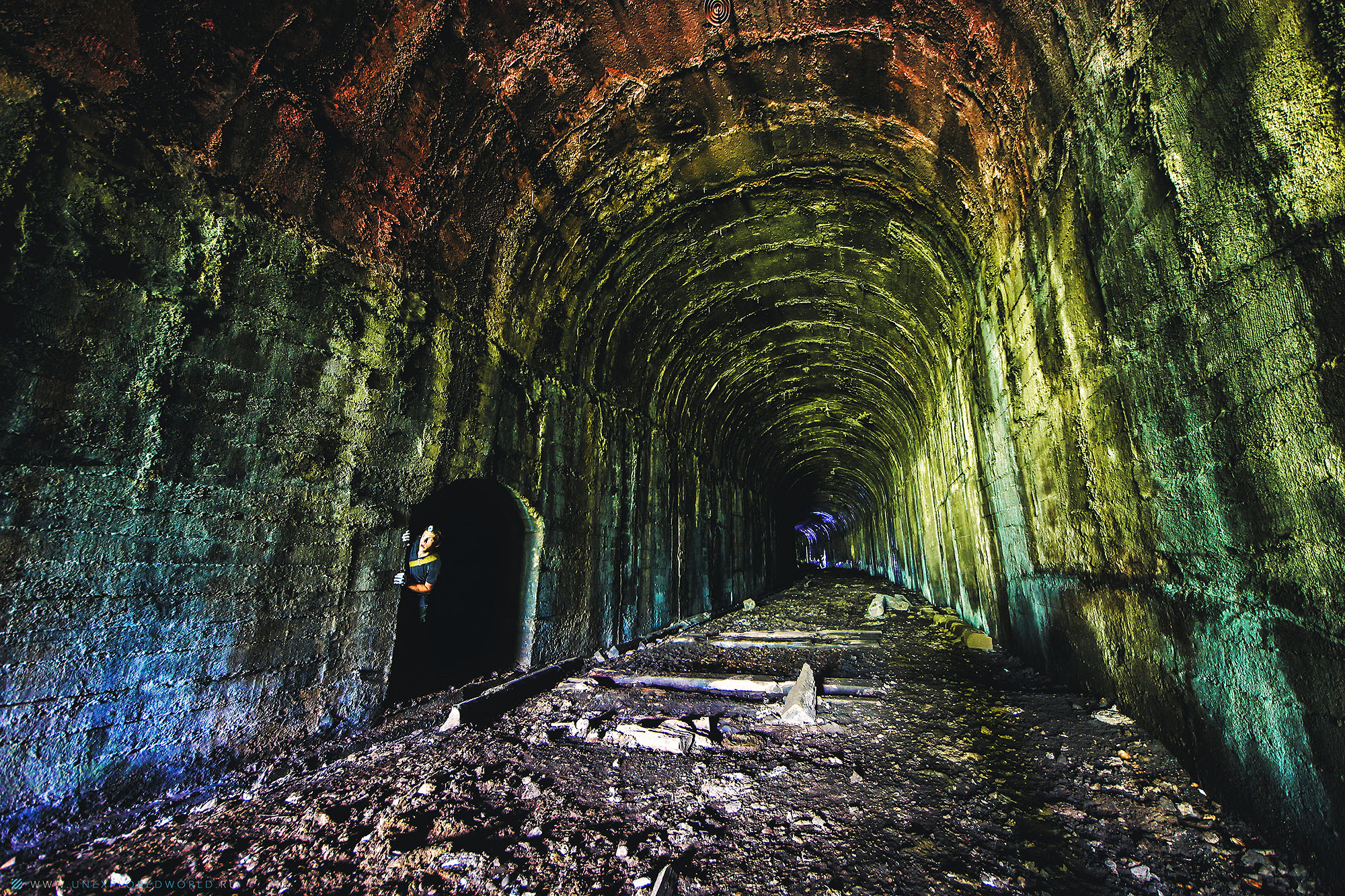 But that's not all. At first, we were all sure that we were just in a section of a parallel tunnel. But that was not the case at all. The failure led to a whole system of underground passages reaching, at times, gigantic proportions. Many forks and branches, exits to the surface. The abandoned tunnel, into which we got from the existing one, after a while led us to another, twice the size of the first! 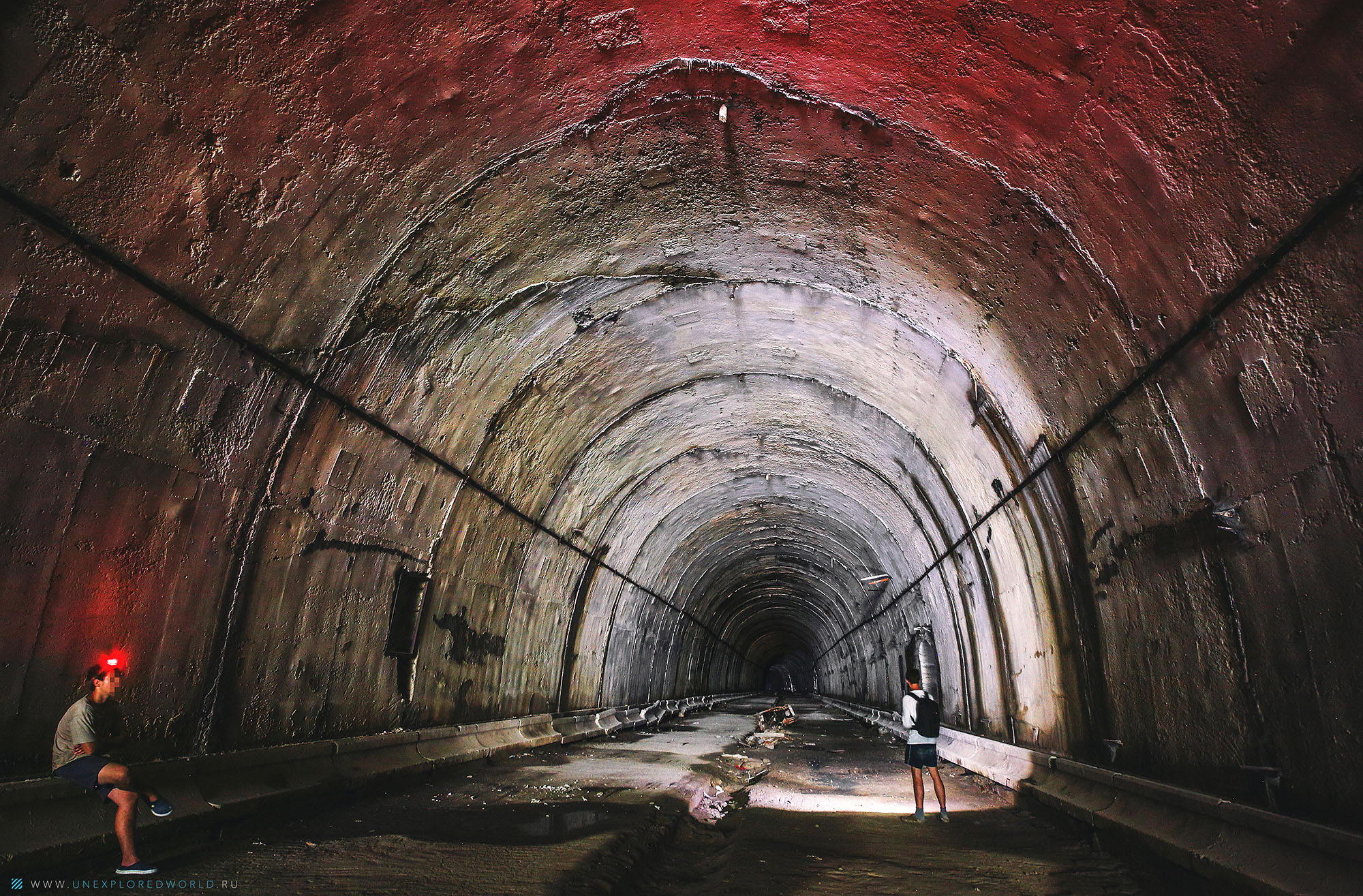 In some places, concrete walls were replaced by very specific tubing. 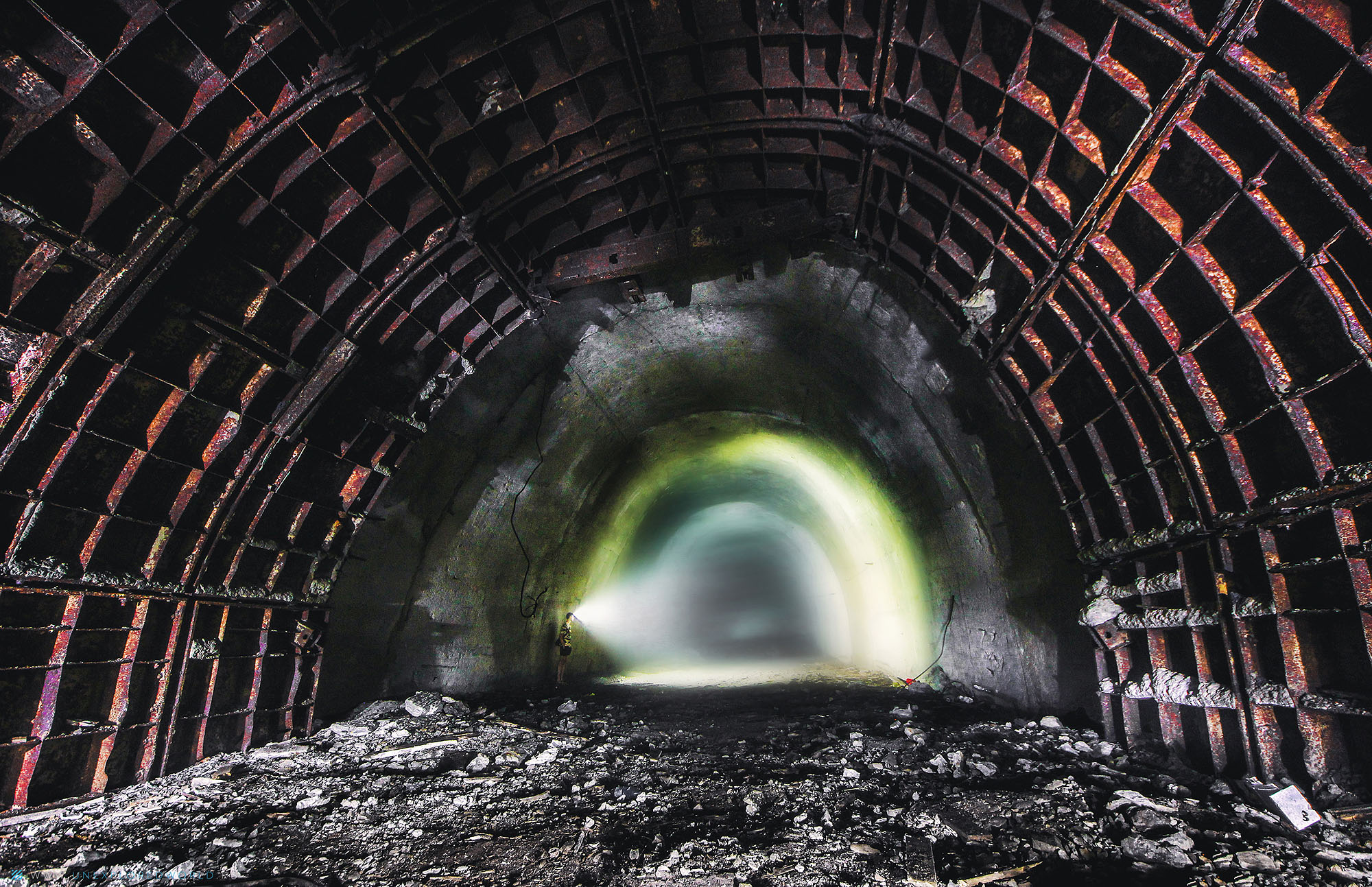 And somewhere the walls were broken, and behind them the rock was visible. 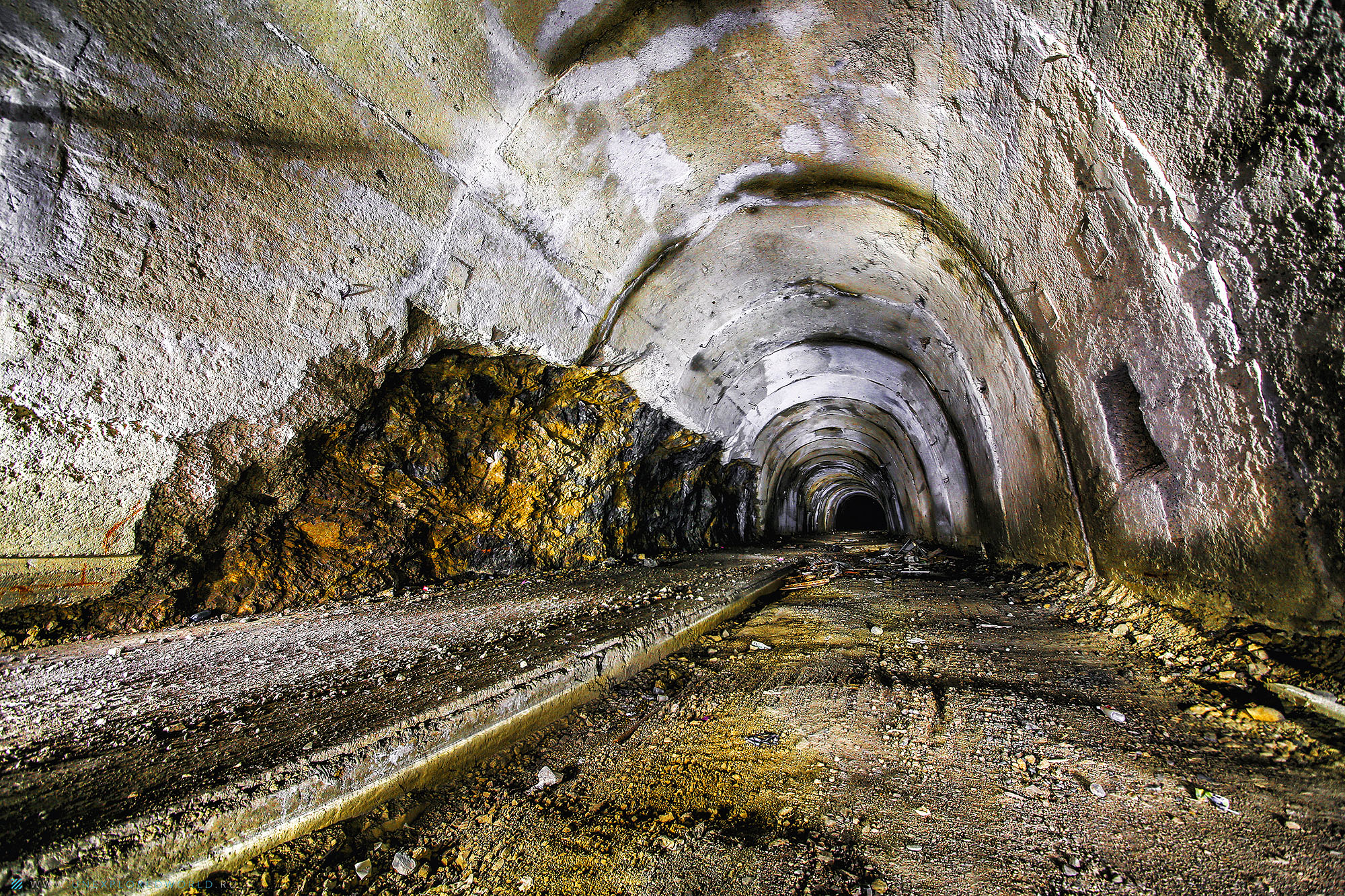 Mark and I looked at Arthur, and everyone marveled at how his eyes were burning from everything that was happening around. 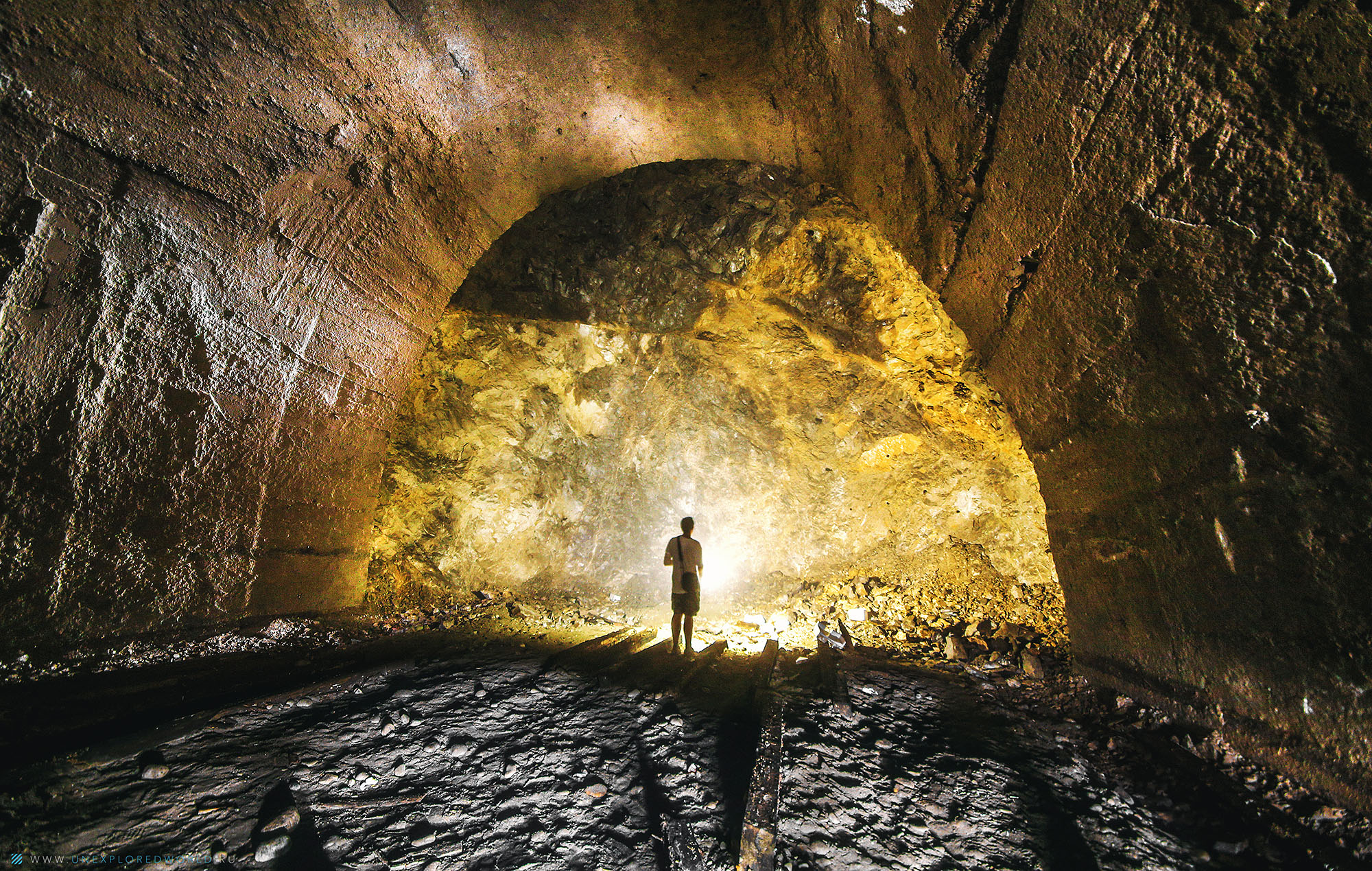 The peak of our surprise was the giant fork in the tunnels. 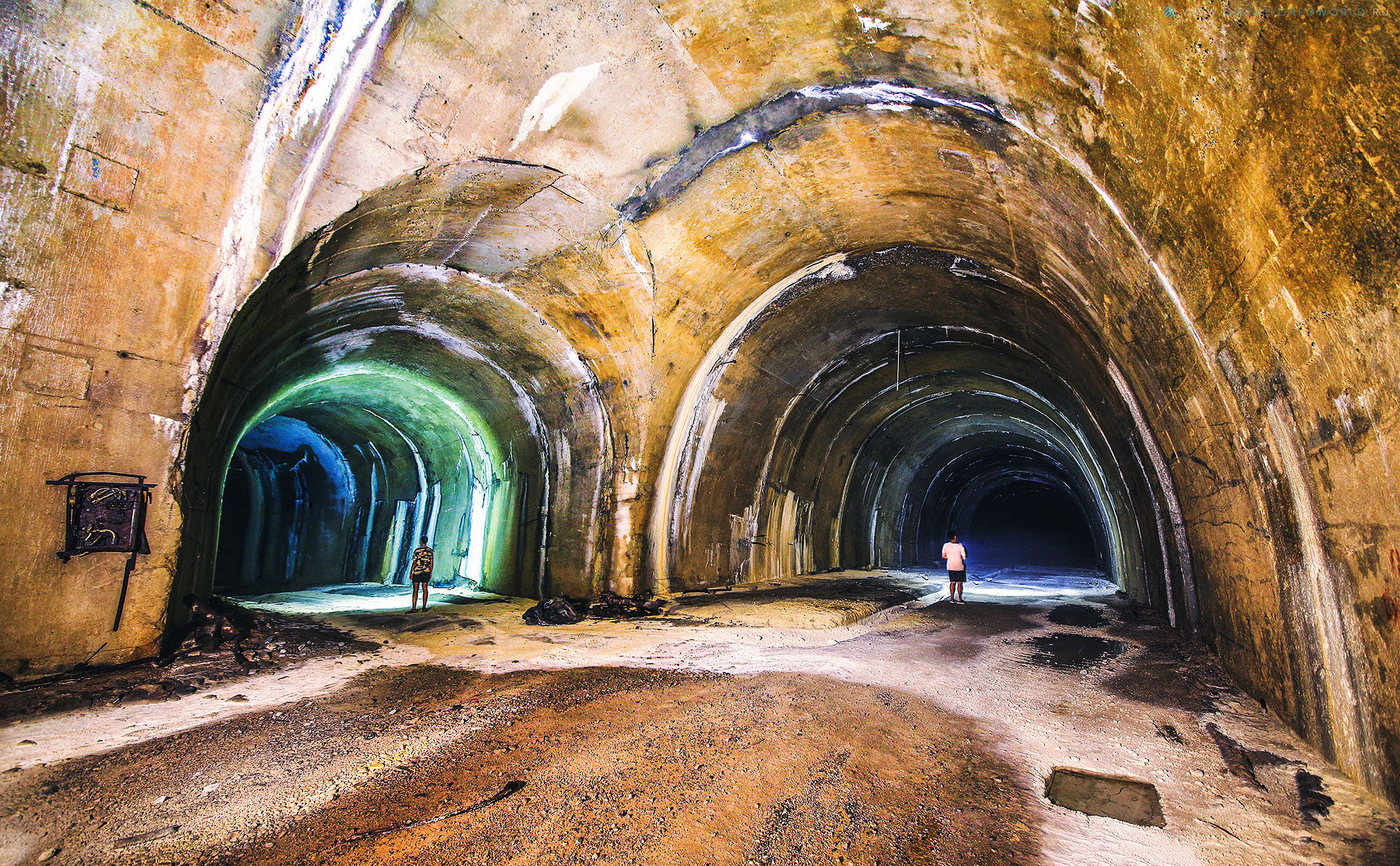 Three of them walked along the left branch and chatted animatedly. - O-fi-get. This is what I did not expect, so this is this - said Mark. - Just think how much an ordinary railway can hide behind itself! Meanwhile, light oozed from around the corner, which meant the tunnel ended. Three friends walked with a ruler, as the width of the tunnel allowed it. When they reached the end, they froze. 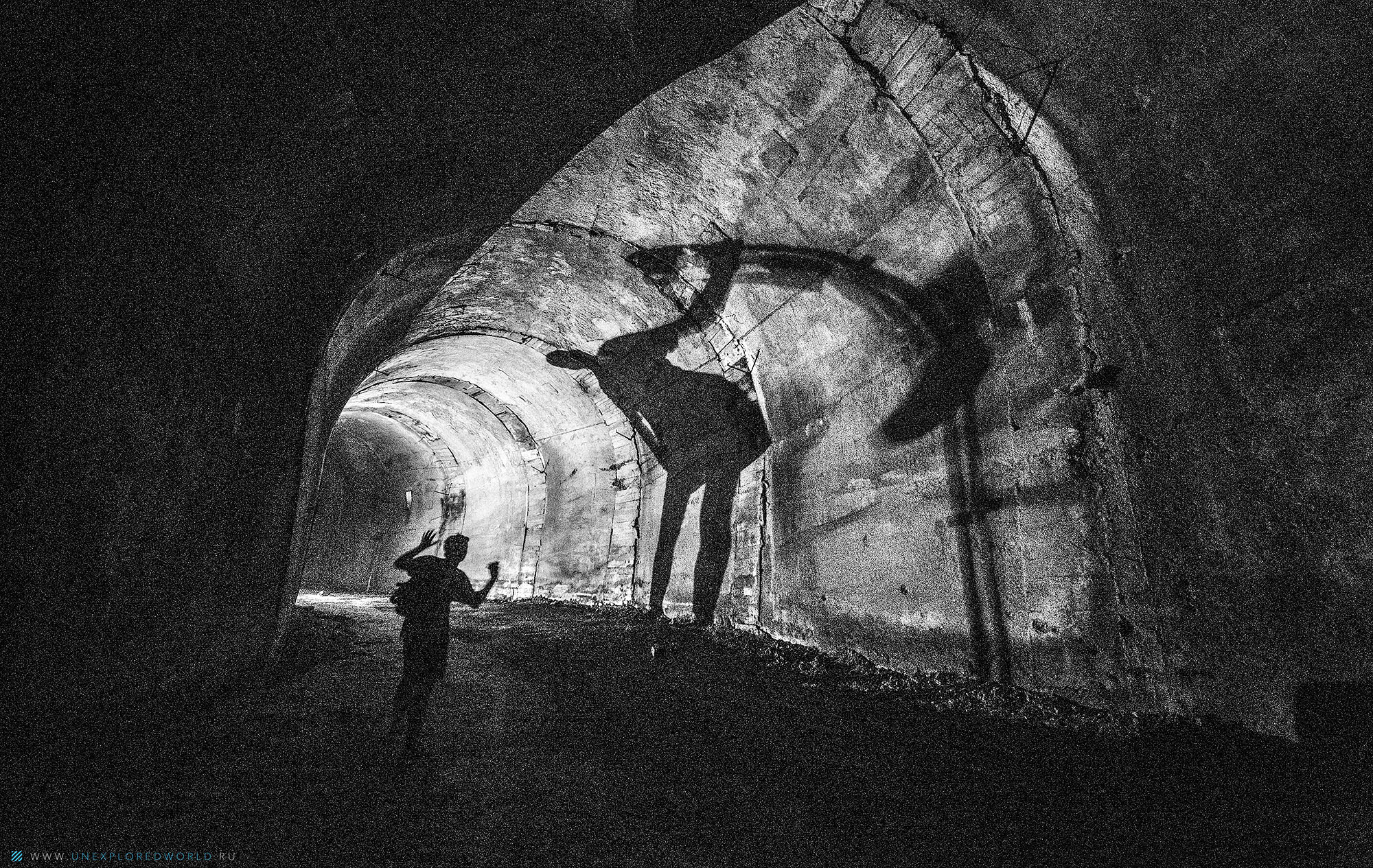 - Marvelous. Straight to the jungle. I muttered. We stood rooted to the spot for about a minute and marveled at the view from behind the semicircular "window". This idyll was broken by Arthur. He walked confidently forward, making his way through the thicket of vegetation. We followed him, as we were also interested in where we ended up, having made such a long way underground. I took out my phone and went to determine the location in the maps. At the same moment, when the navigator determined where we were, Arthur exclaimed from the nettle bushes: “Guys, guess where we are from three times ?!”. I squeezed through to him and saw the very foot of the mountain where our modest company stood yesterday. - Fuck, I almost came close to this tunnel then, as soon as I did not notice it? - Arthur was surprised. Yeah, amazing things happen. 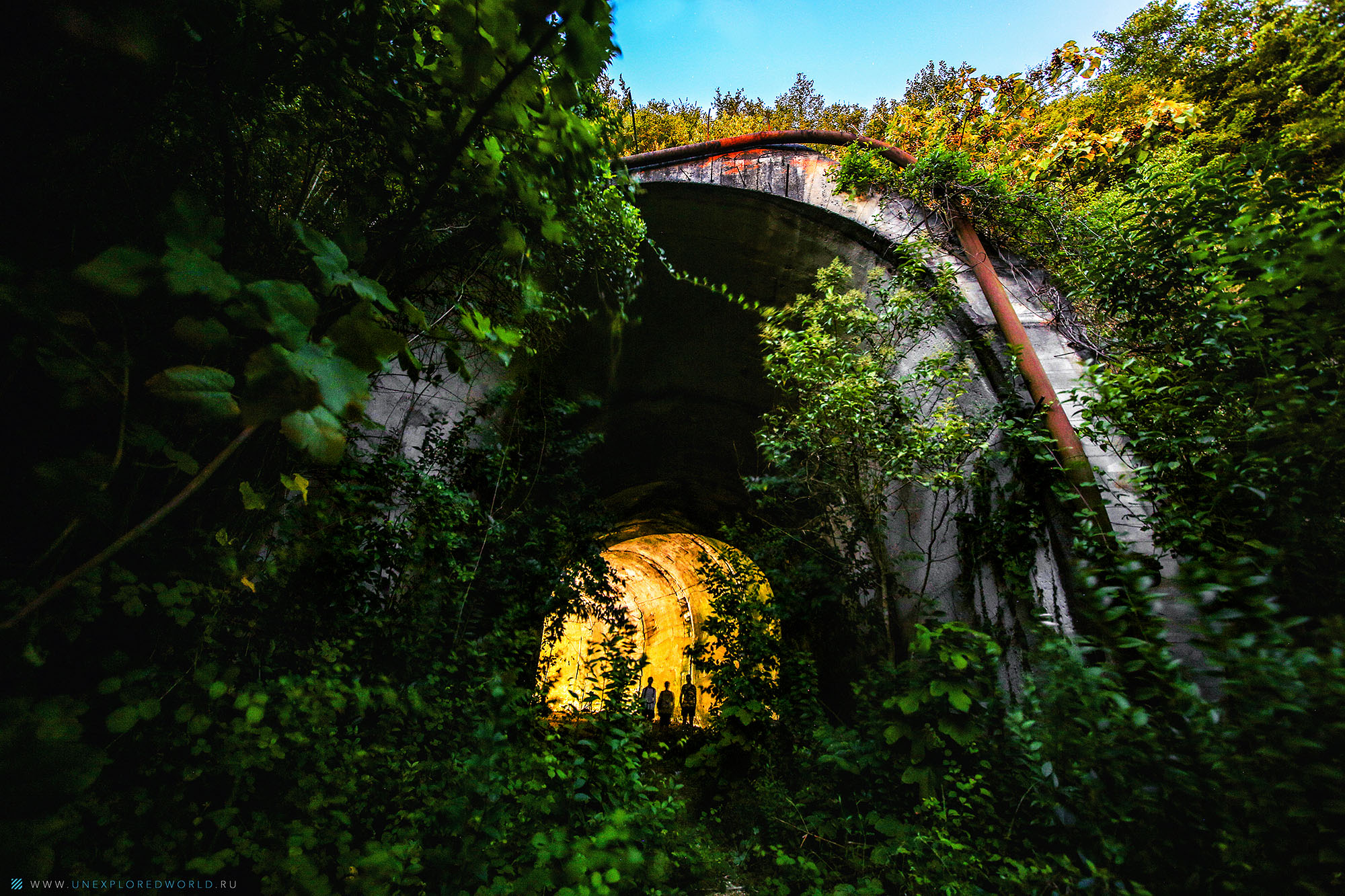 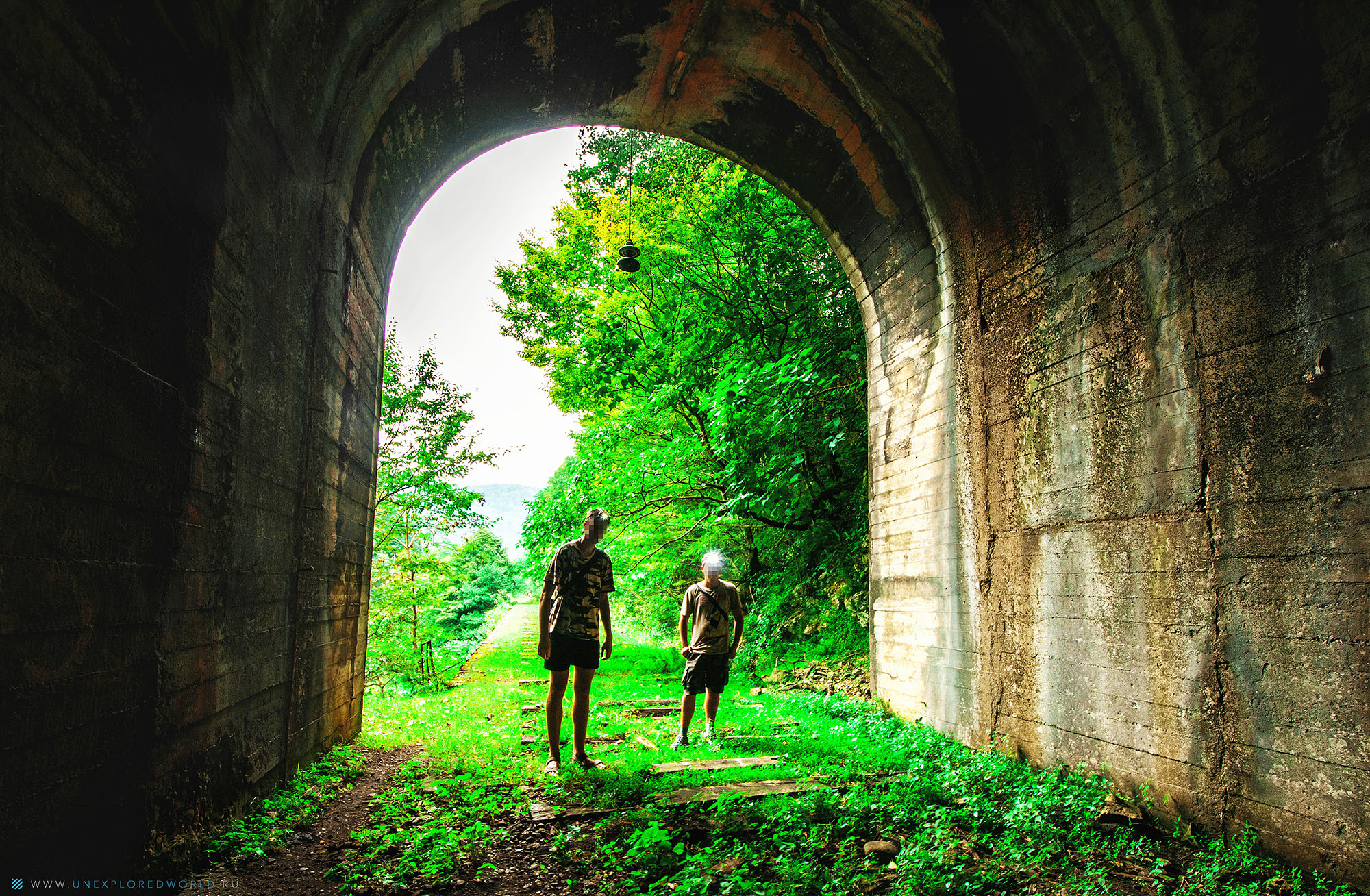 Finally, as a small bonus, I would like to showcase some photos from another stunning place in Abkhazia. The place is really very cool, I want to share it, but I don't want to go to a separate post. This place is an underground laboratory on the basis of the Sukhumi Institute of Physics and Technology. In it, after the Second World War, hundreds of Soviet and German scientists worked to improve the atomic bomb by obtaining a purer isotope of uranium-235. The territory where the laboratory was located was codenamed "Object A" at the time of research in honor of the German scientist Manfred von Ardenne, who was its scientific advisor. 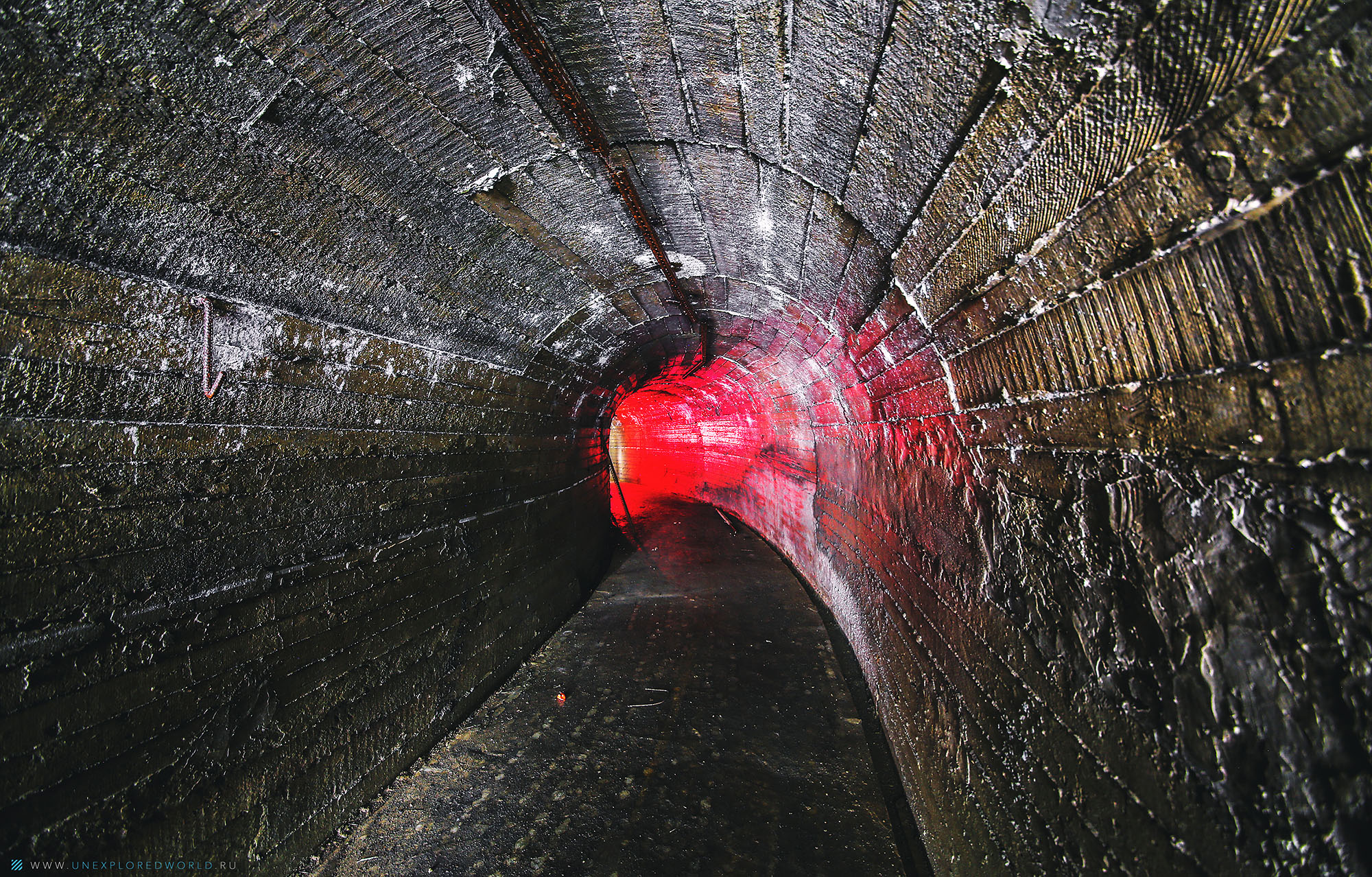 Approach development leads to a block ... In a tile ?! Tile? Seriously? 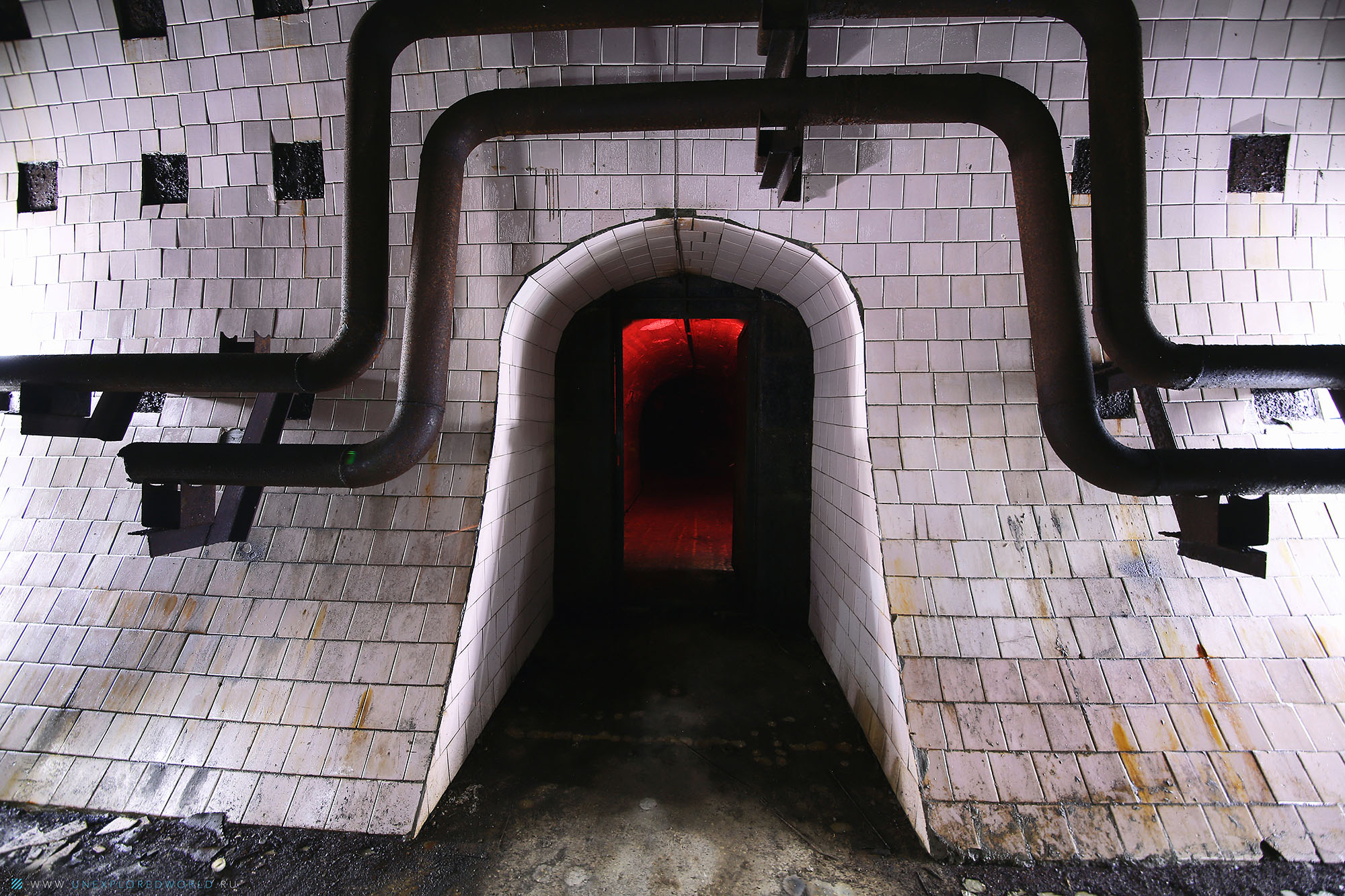 Yes, the entire laboratory block is tiled. Perhaps this was done for some kind of scientific and technical purposes, but, we must pay tribute, the tiles give the metro construction object some special charm. 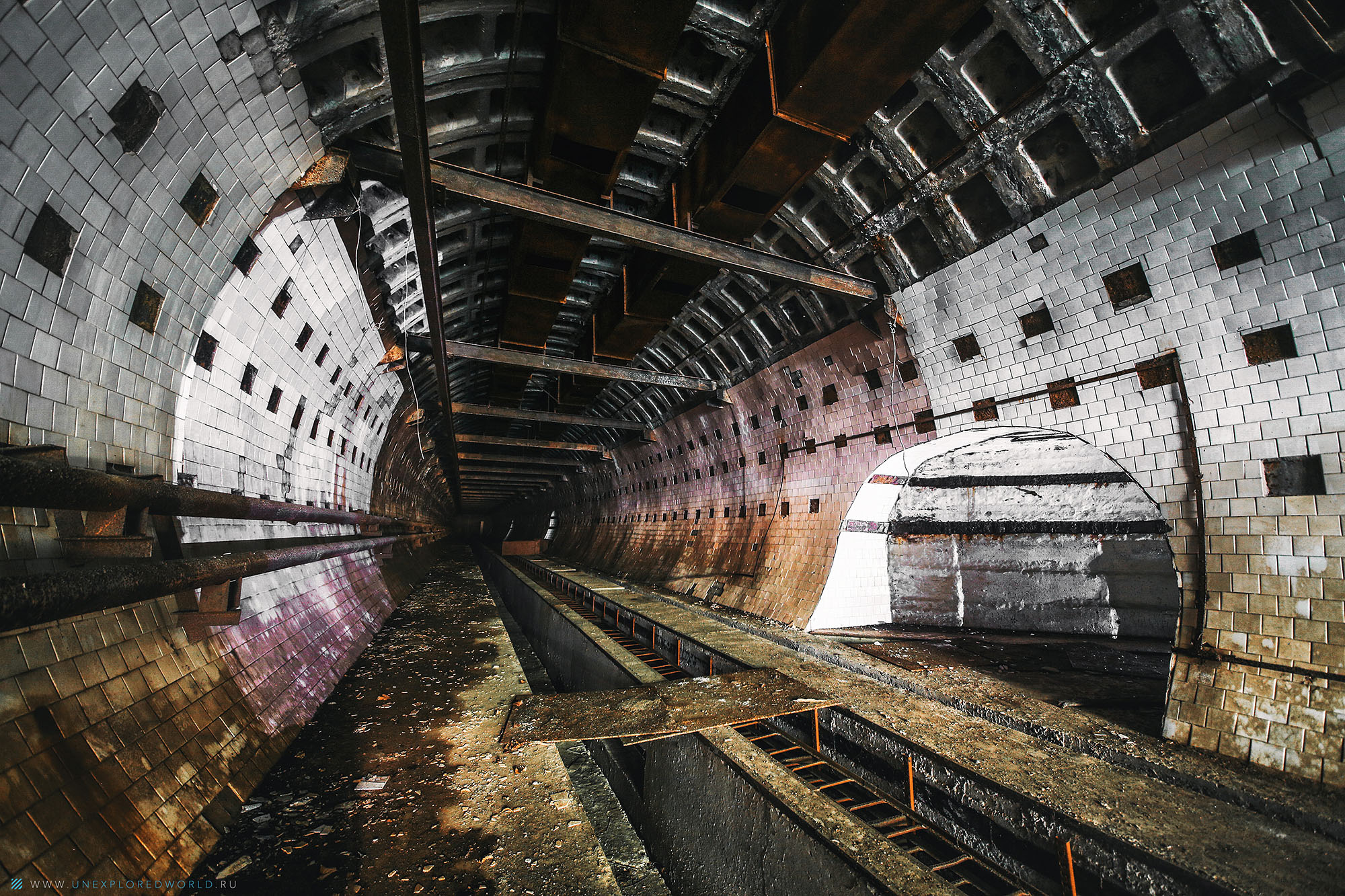 It is not known whether this facility was completed and launched, but most likely not, since it lacks ceiling and floor coverings, as well as traces of equipment dismantling. 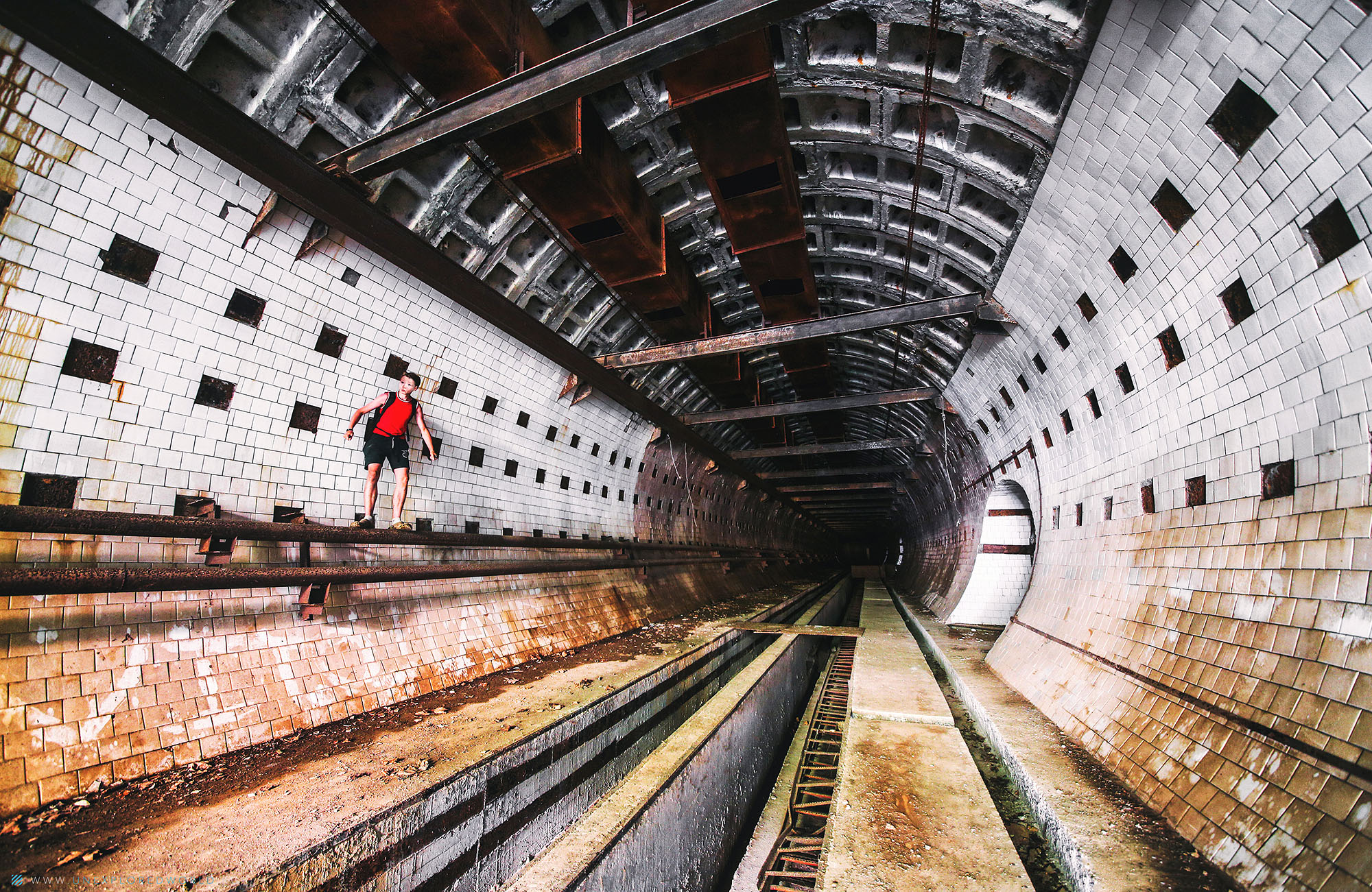 Attention! This post is tagged #fill! This means that the entire story described in the post is a sick fantasy of the author. The objects shown in the photographs either do not exist at all, or their configuration is greatly exaggerated. Don't believe what you see.