Repair shop of one aircraft plant

The most interesting surprises await you around the corner when you don't even know about them. Already painfully familiar to all actions: we climb over the fence, stealthily move to the very center of the aircraft plant, to where the main assembly shops should theoretically be located. At such moments, a feeling of excitement does not leave you for a second, and you know: it is not casual. The plant works, and, as a rule, the sweeter the fruit, the better it is guarded. But what awaits us behind the perimeter of the fence, light dashes and walls of the next workshop? 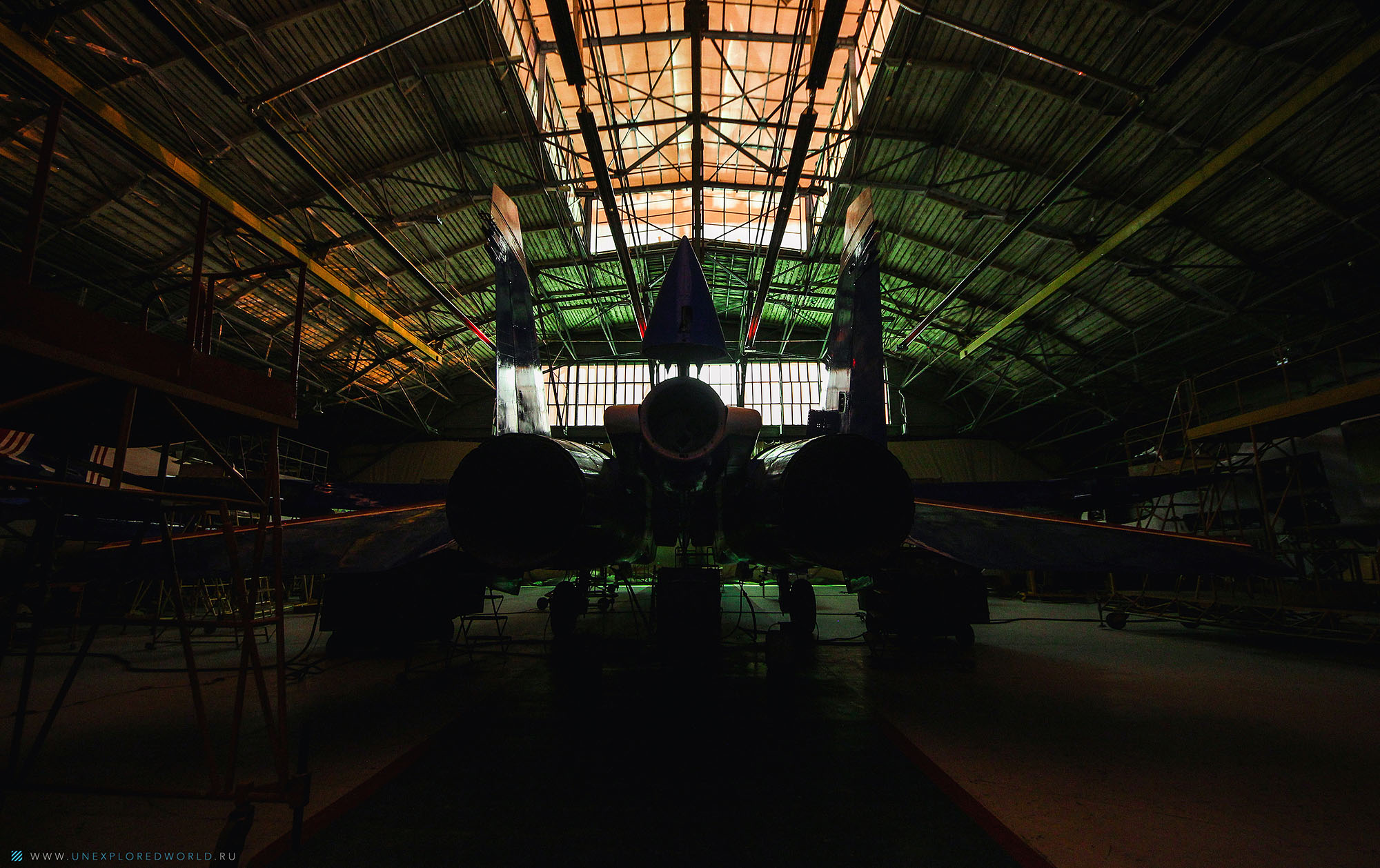 The first picture that you see, entering an inconspicuous building, is a room with various measuring equipment and soldering stations. This is probably where electronic aircraft parts are repaired. 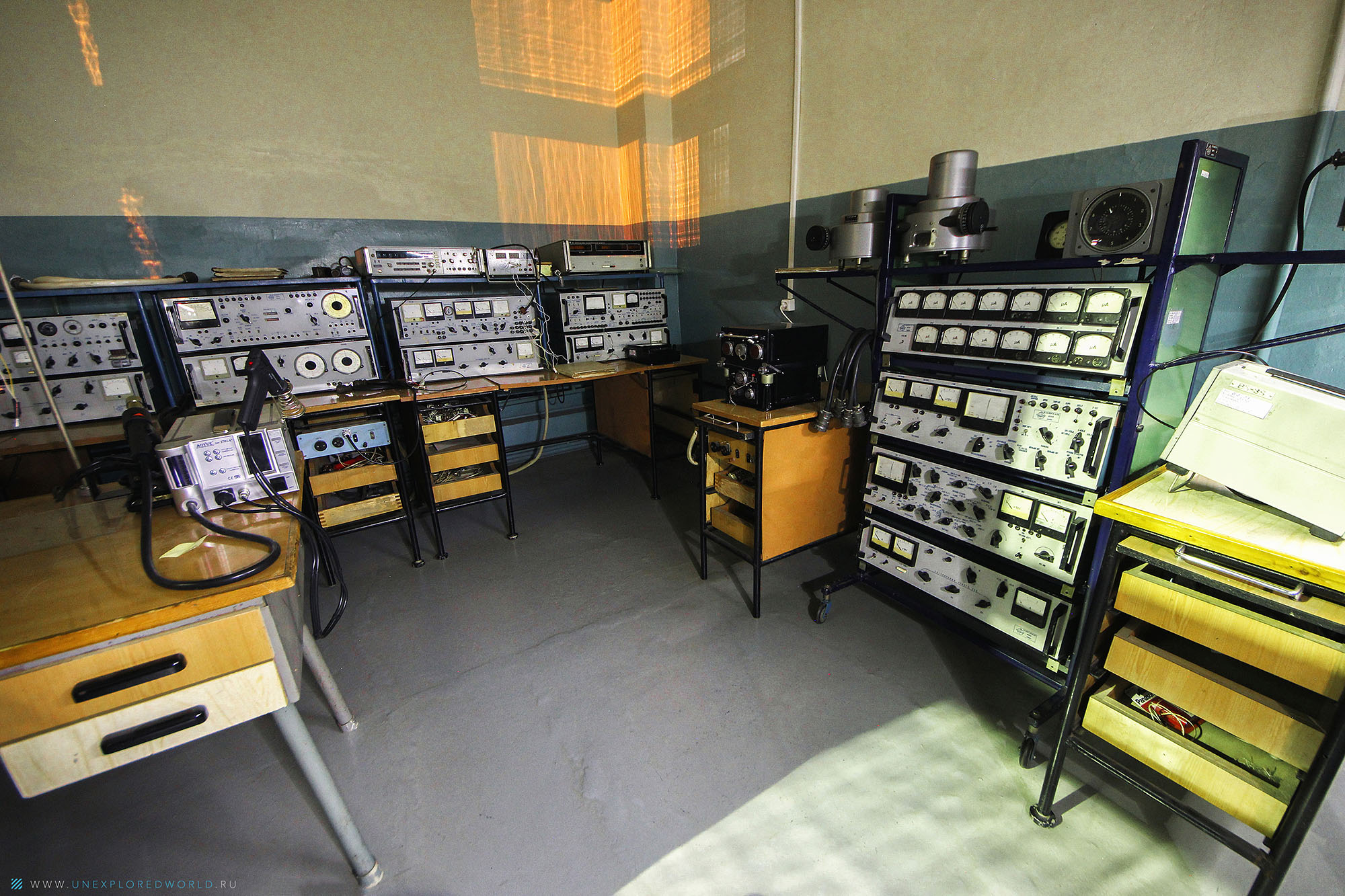 The next room is various fuselages and aircraft fairings. They hint that we need to get out of the technical corridors as soon as possible to the main hall of the workshop, where something interesting should await us. 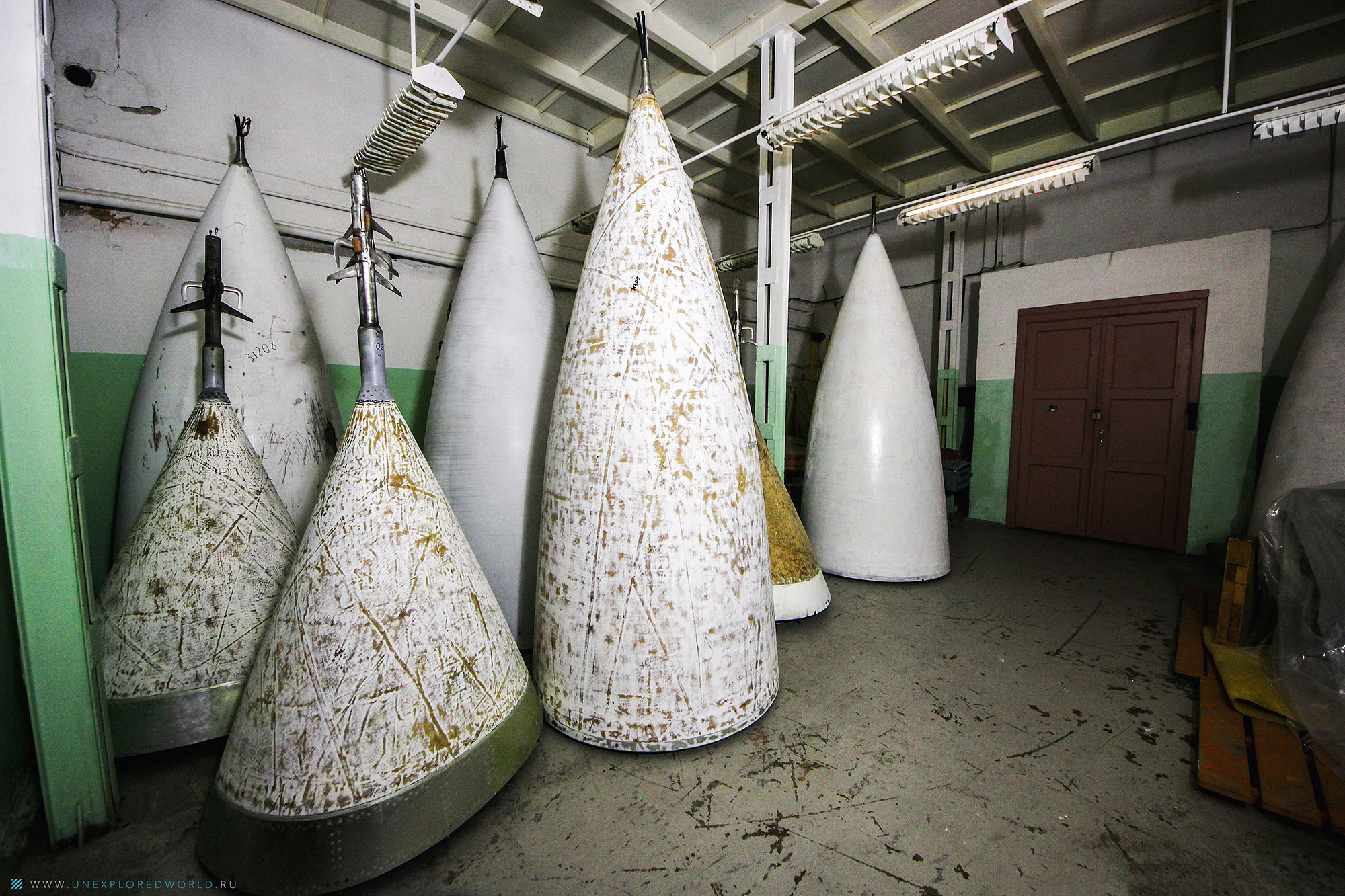 On the other side of the room: 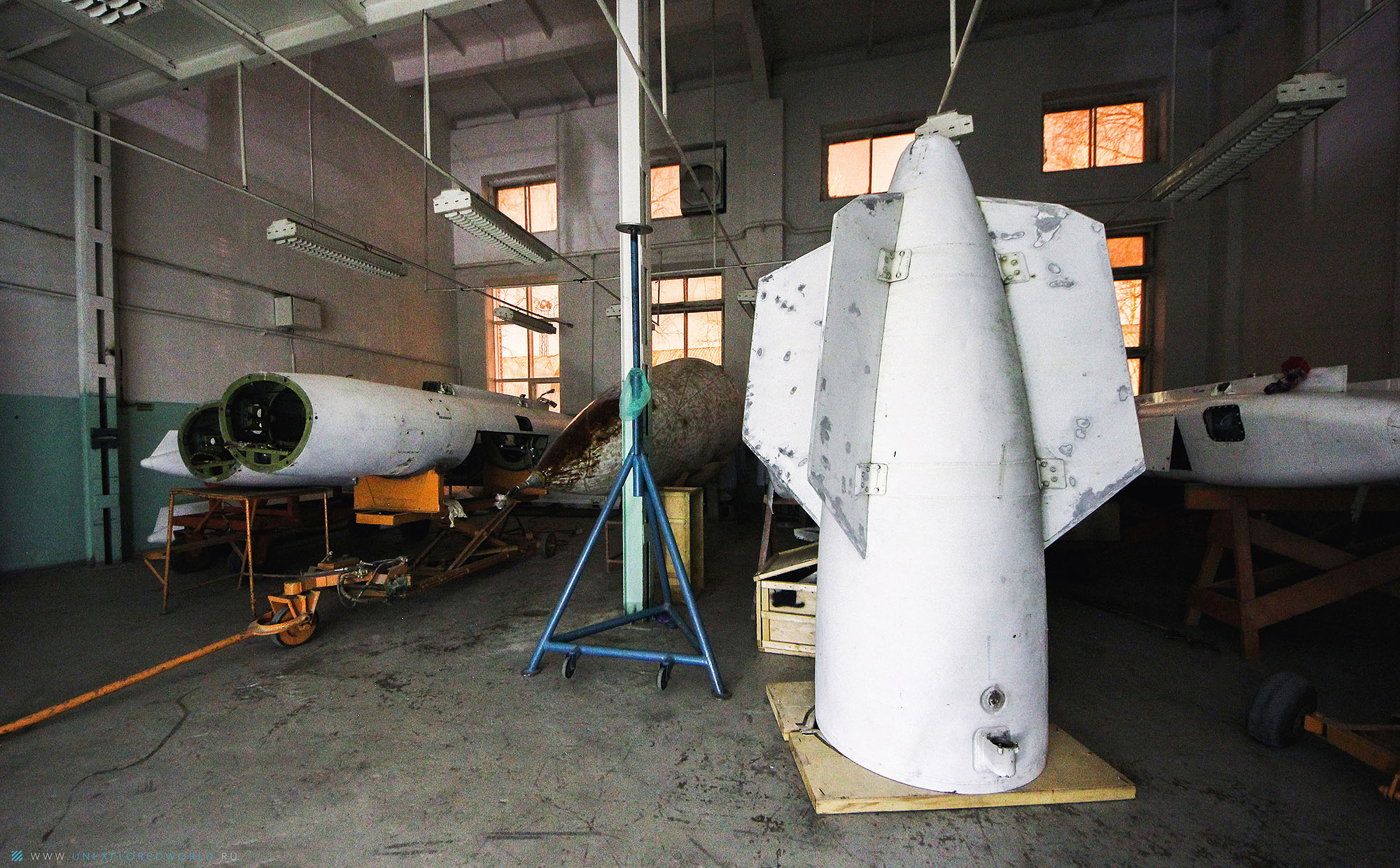 And finally, the coveted door was found. There were a few more fairings lying next to her, and behind her ... 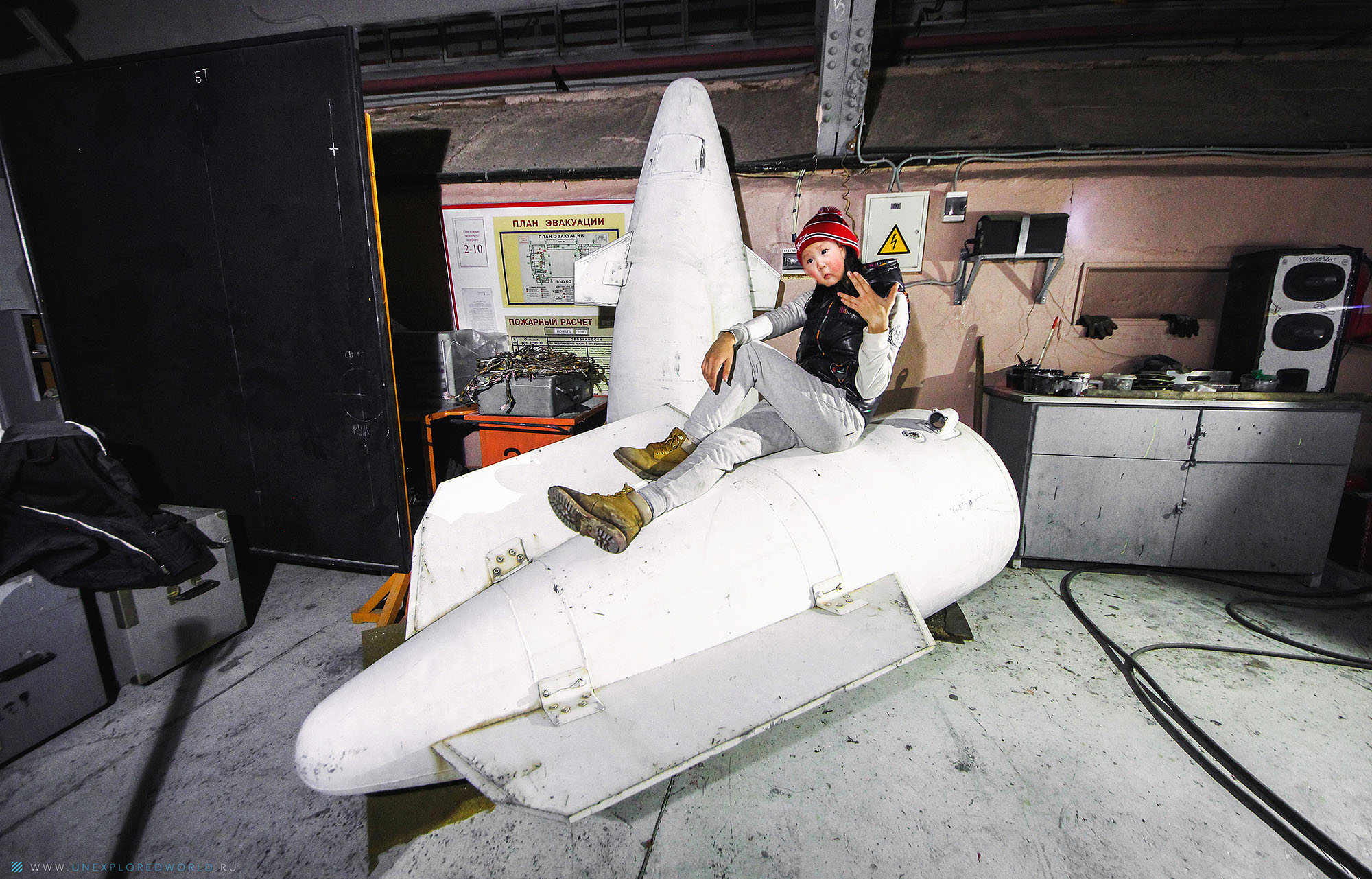 Many jet planes of varying readiness. 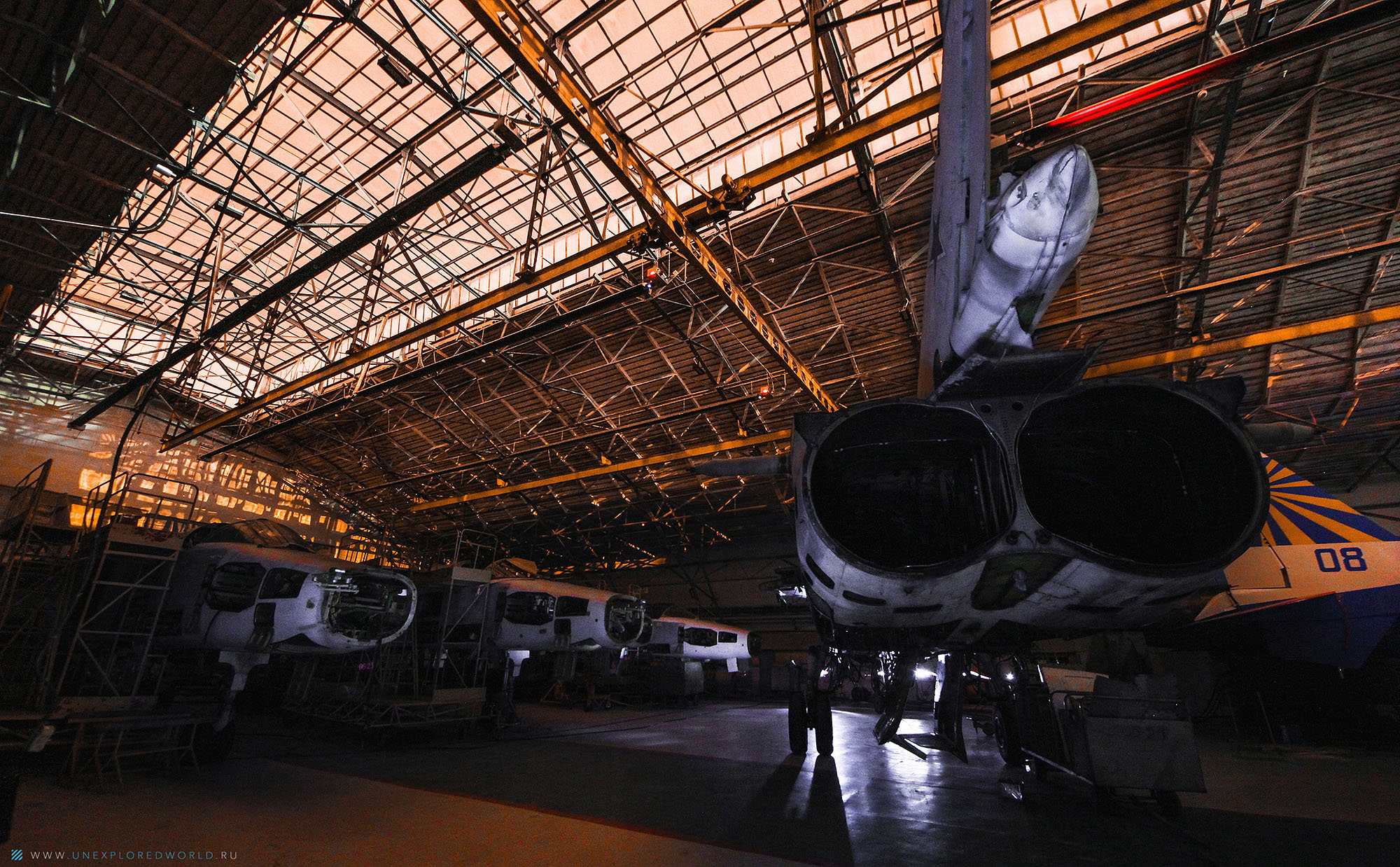 Basically, these were either mock-ups of aircraft or structures at the initial stage of assembly, but at the main gate inside the workshop there was something for which it was really worth a look. 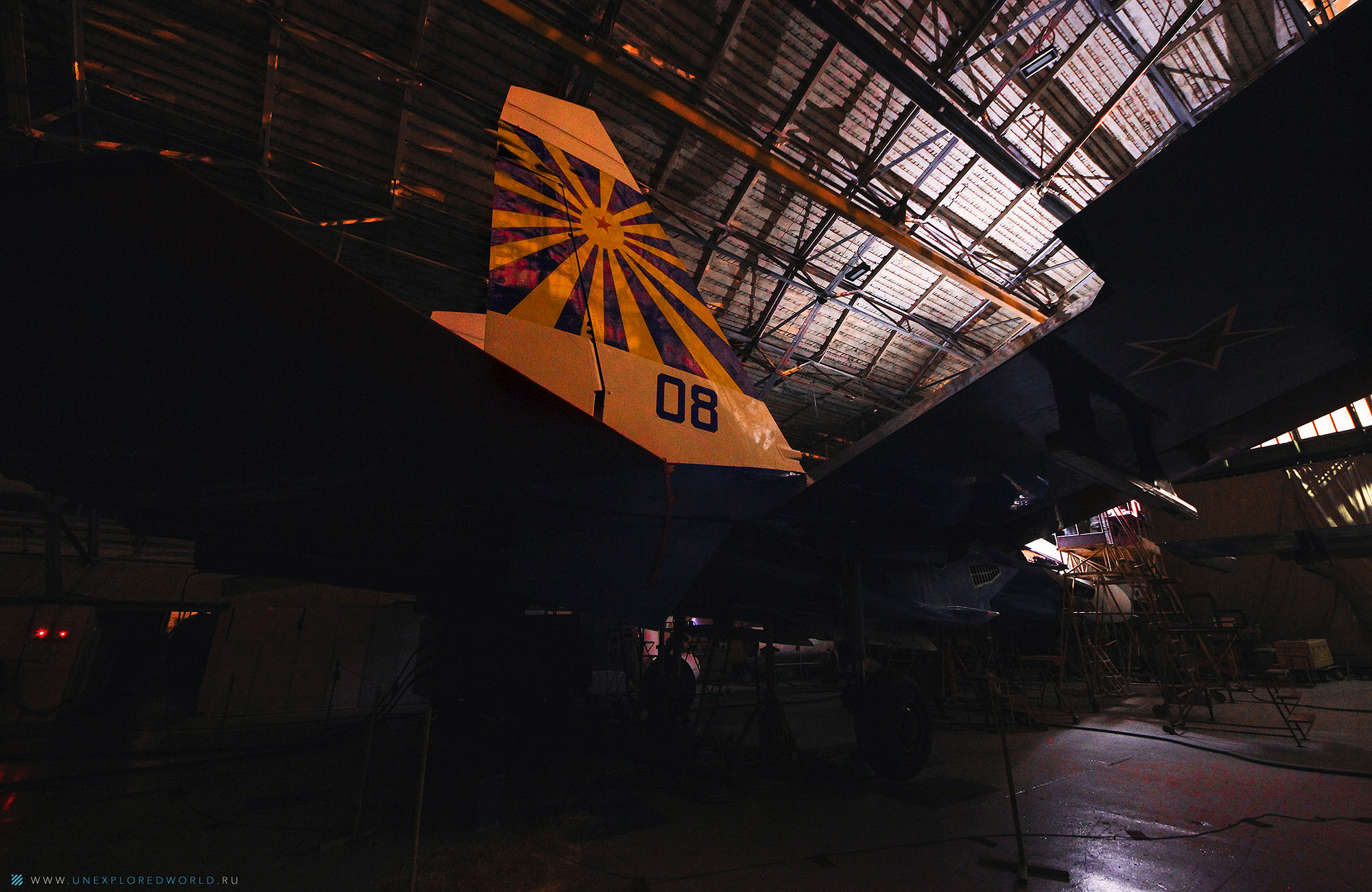 These were two Su-27s belonging to the "Russian Knights" aerobatic team, apparently aimed at repairs. 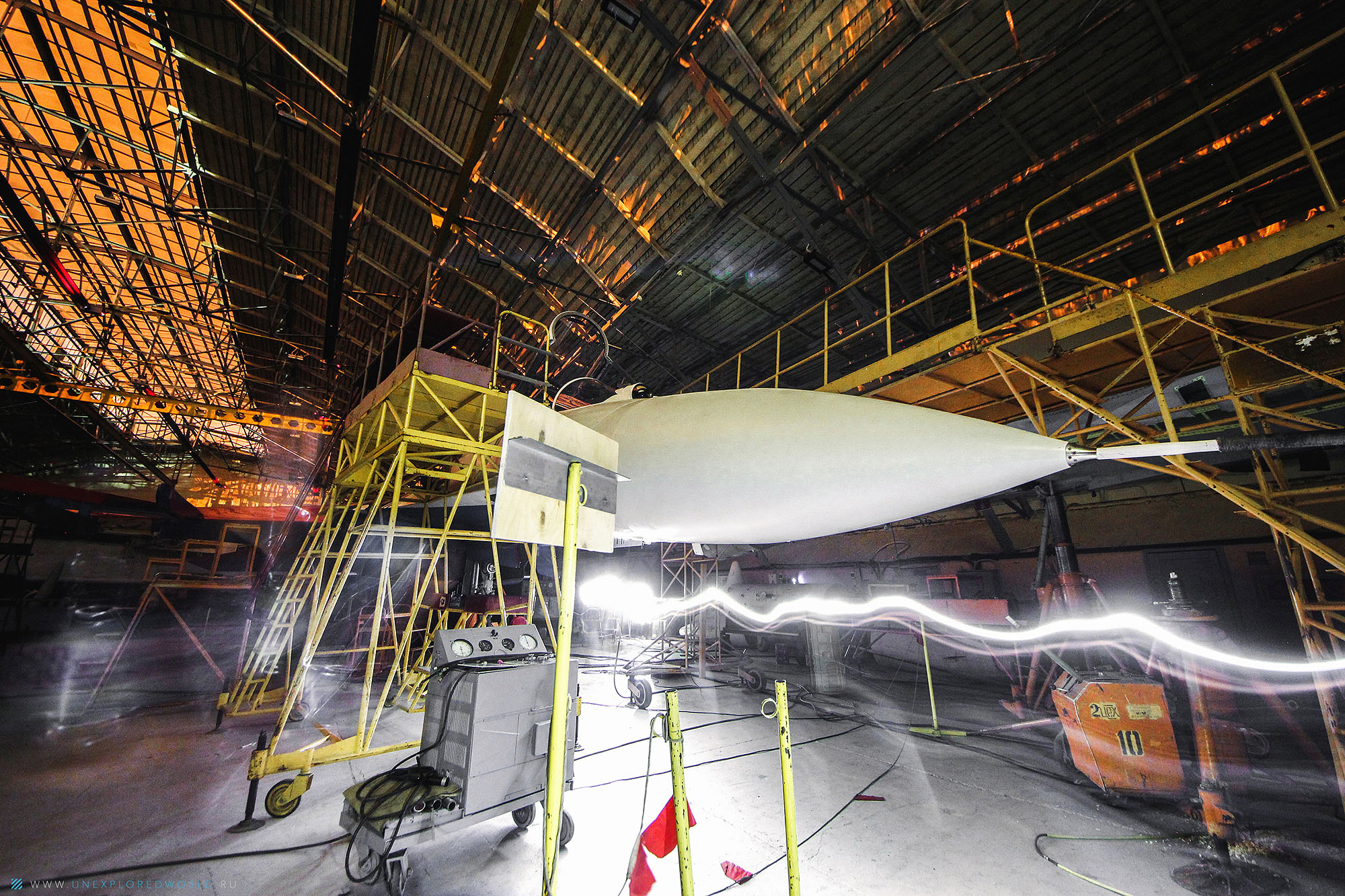 The planes were polished to a shine and looked so fresh as if they had left the assembly line a minute ago. 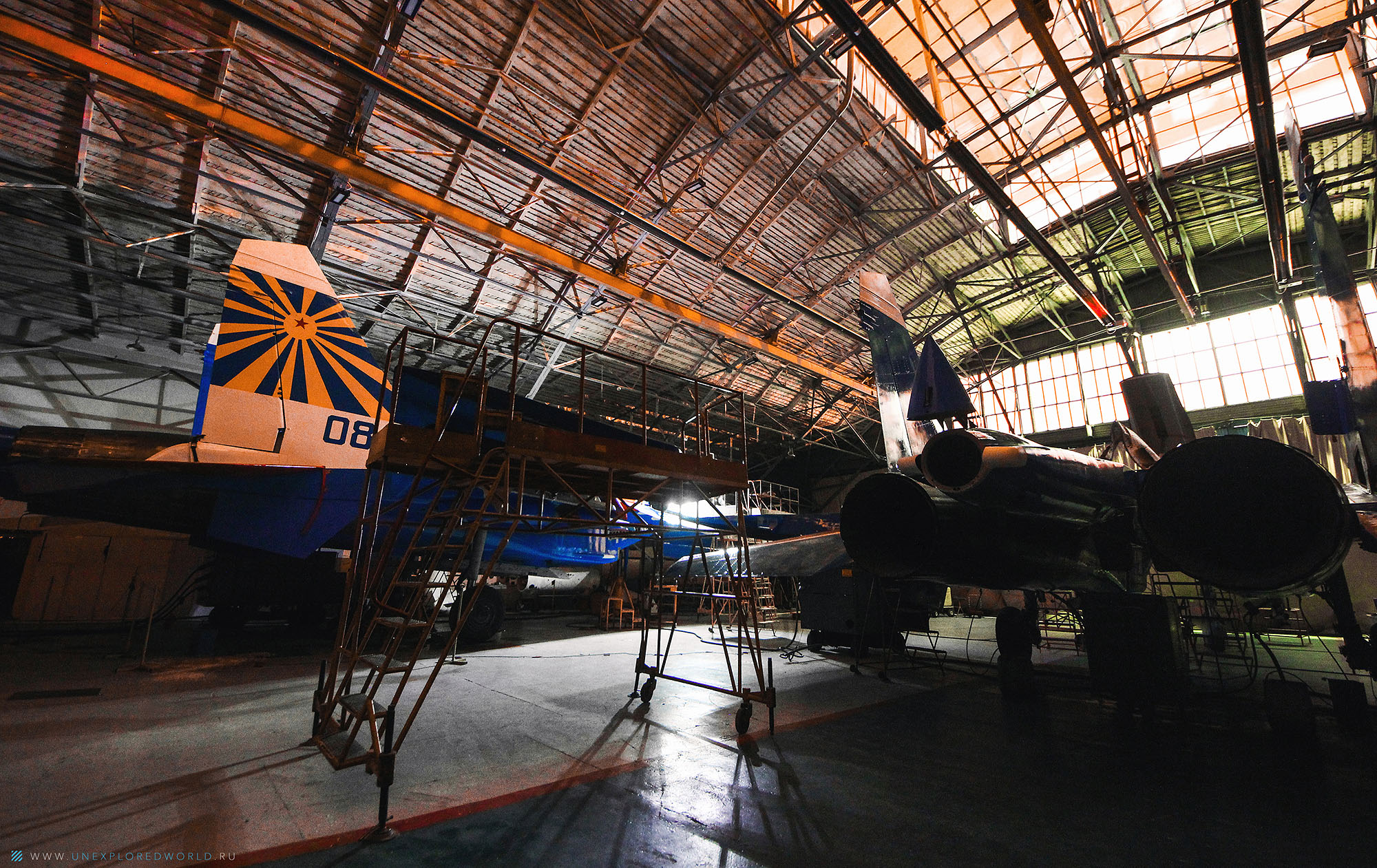 It was necessary to take pictures in the shop very carefully, since at any moment the light from the lanterns could be noticed by the guards of the enterprise making a round. 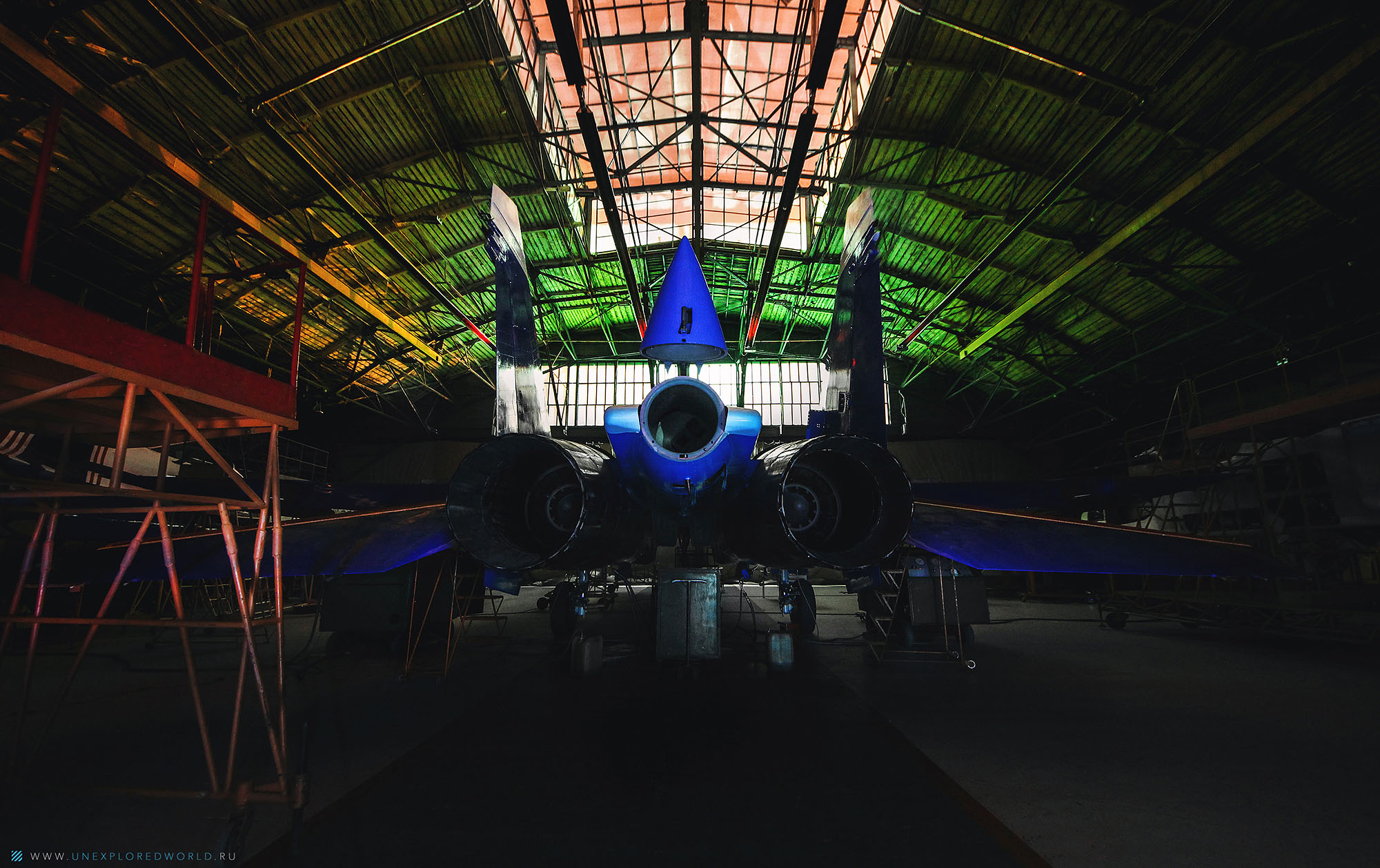 Combat vehicles, even in the repair cradle, looked majestic - you look at them and are surprised at the triumph of engineering. 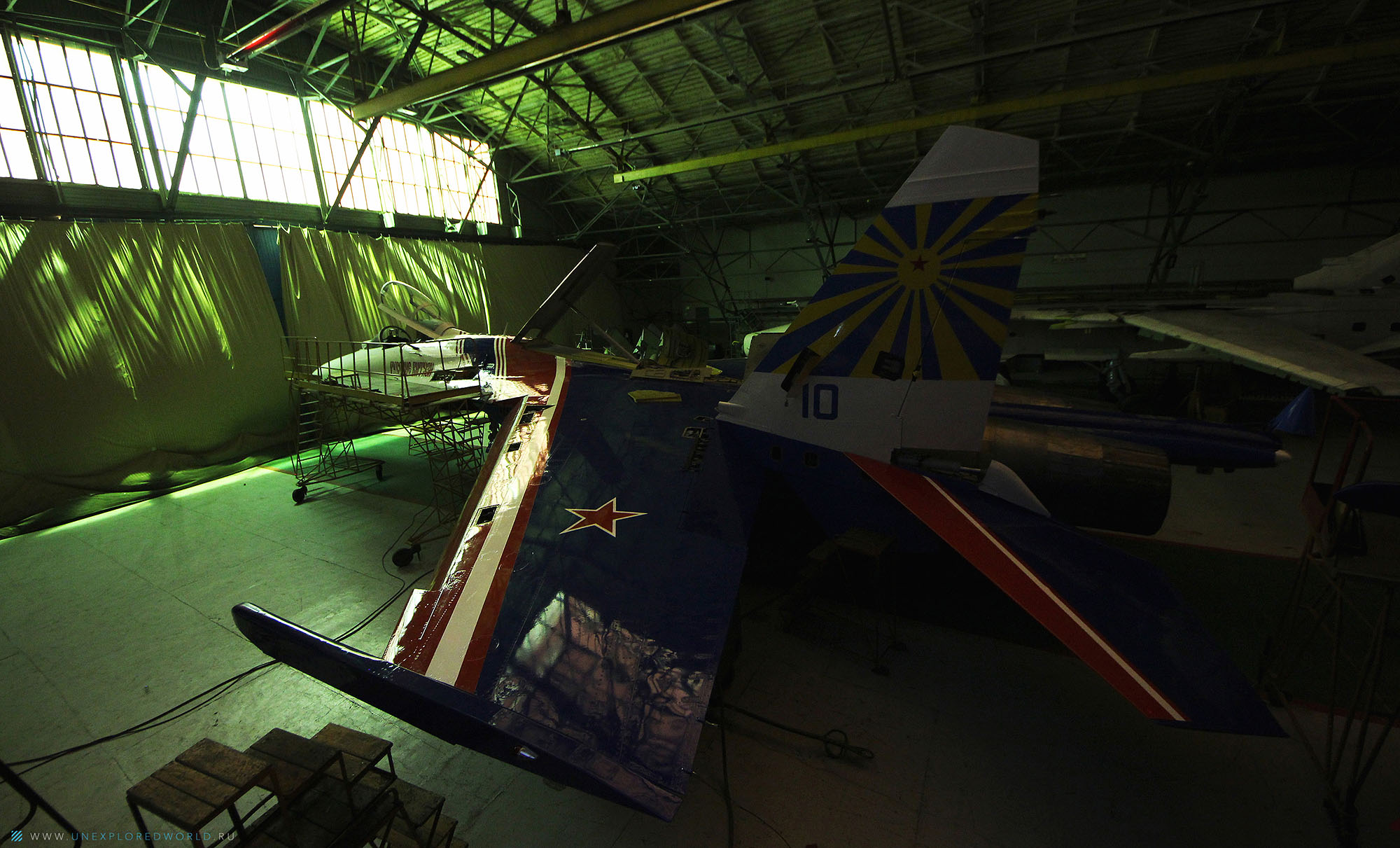 There was not a single stain or scratch on the planes. The only thing that hinted at traces of their operation was the thermal corrosion of the turbines. 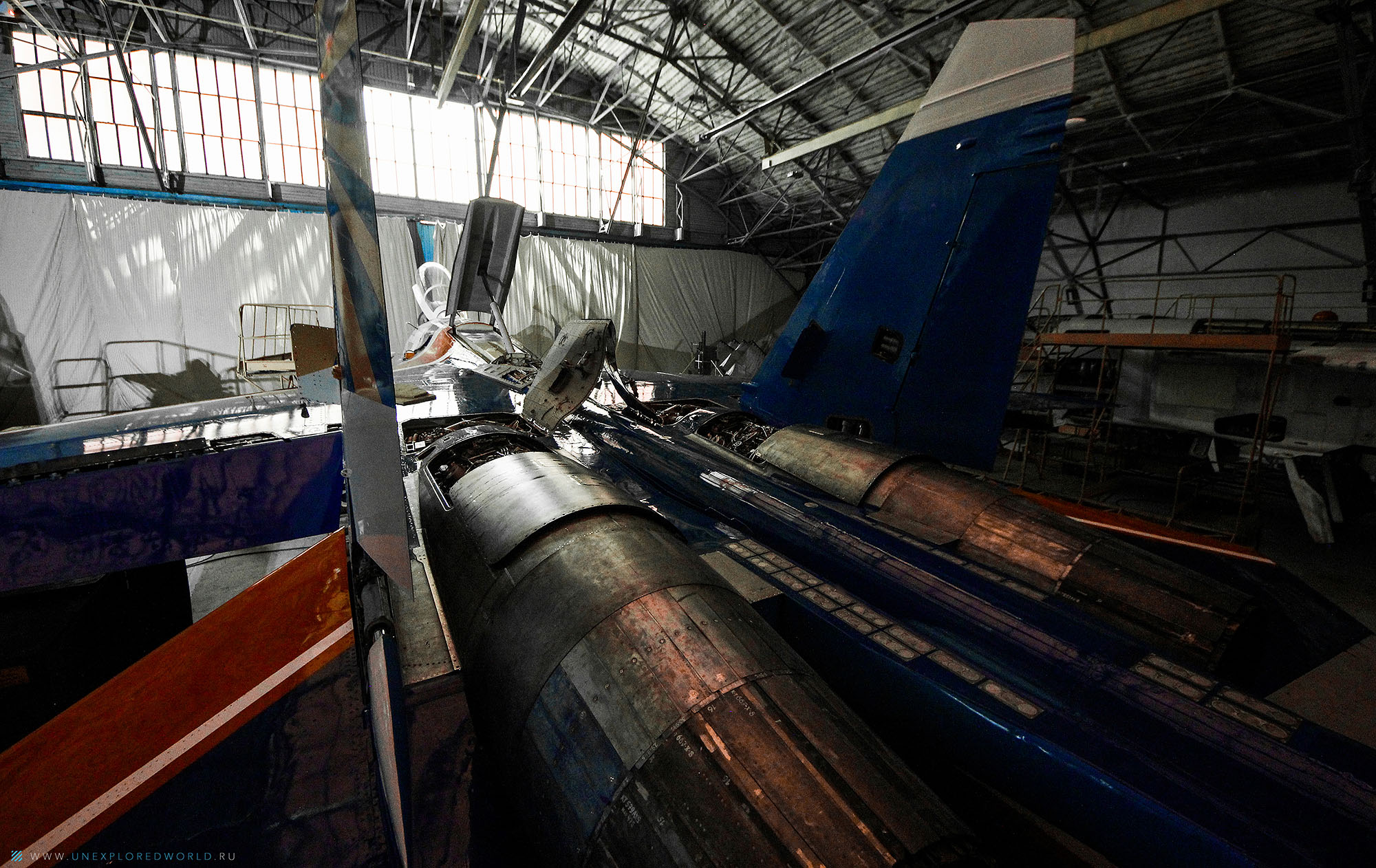 Most likely, for these aircraft, the onboard electronics were checked here and the turbine blades were treated with a special slip that protects the active elements of the engine from overheating. 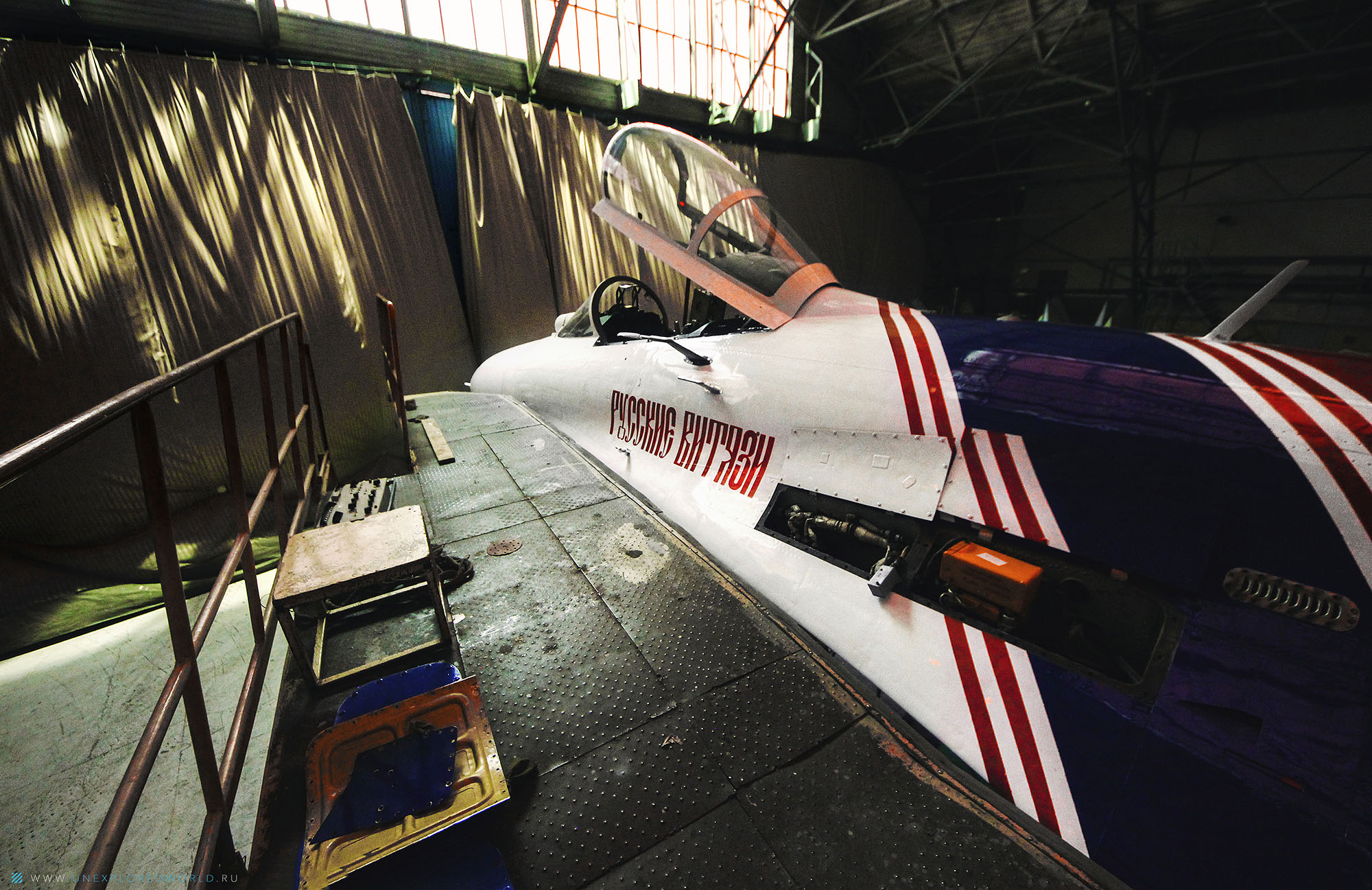 It is not very convenient to get into the cockpit of military aircraft (unlike the same helicopters). It was quite problematic to do this even from special forests. 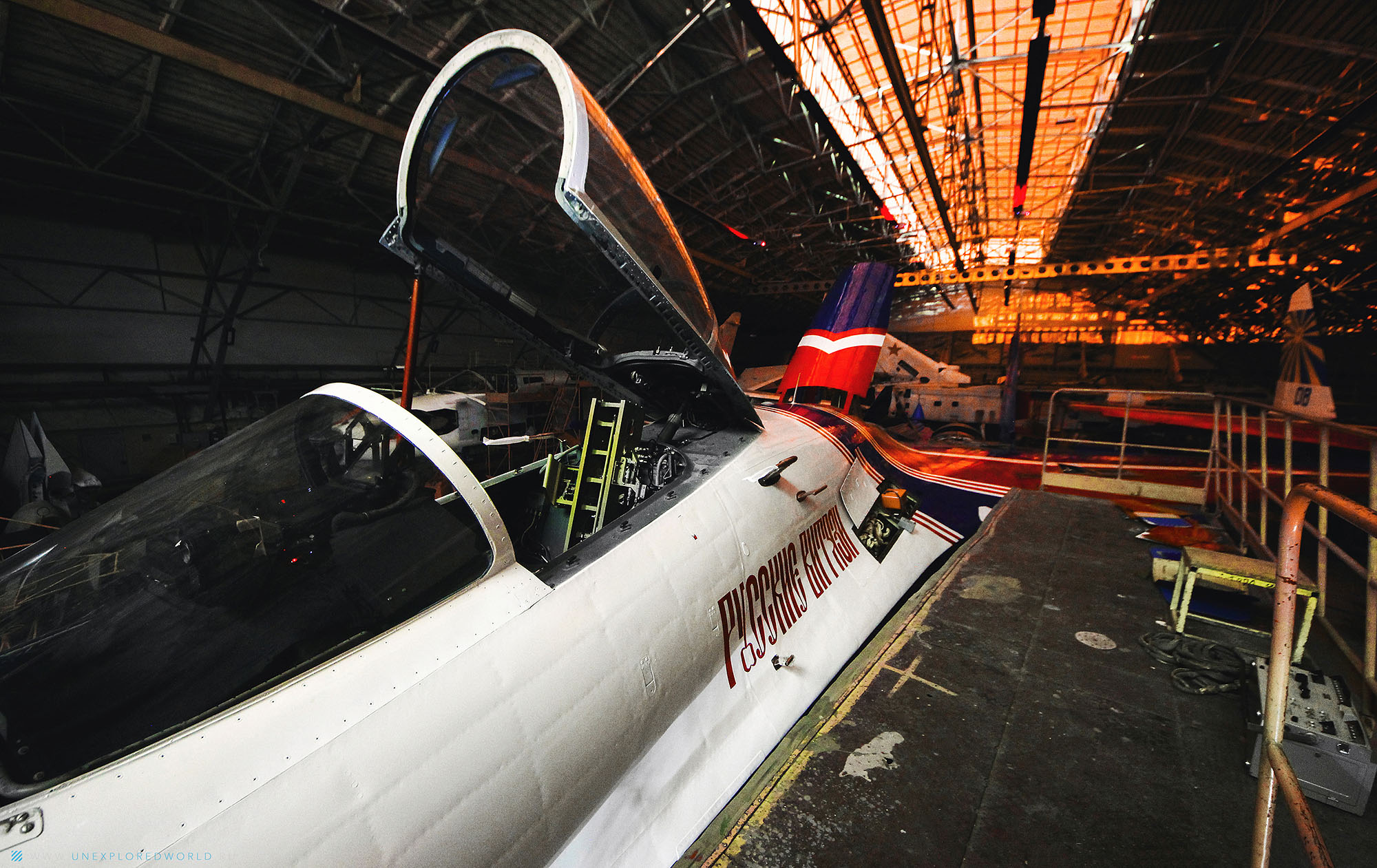 The light from the factory's on-duty lighting shining through the windows creates shadows on the ceiling that go into some kind of fractal-like patterns. 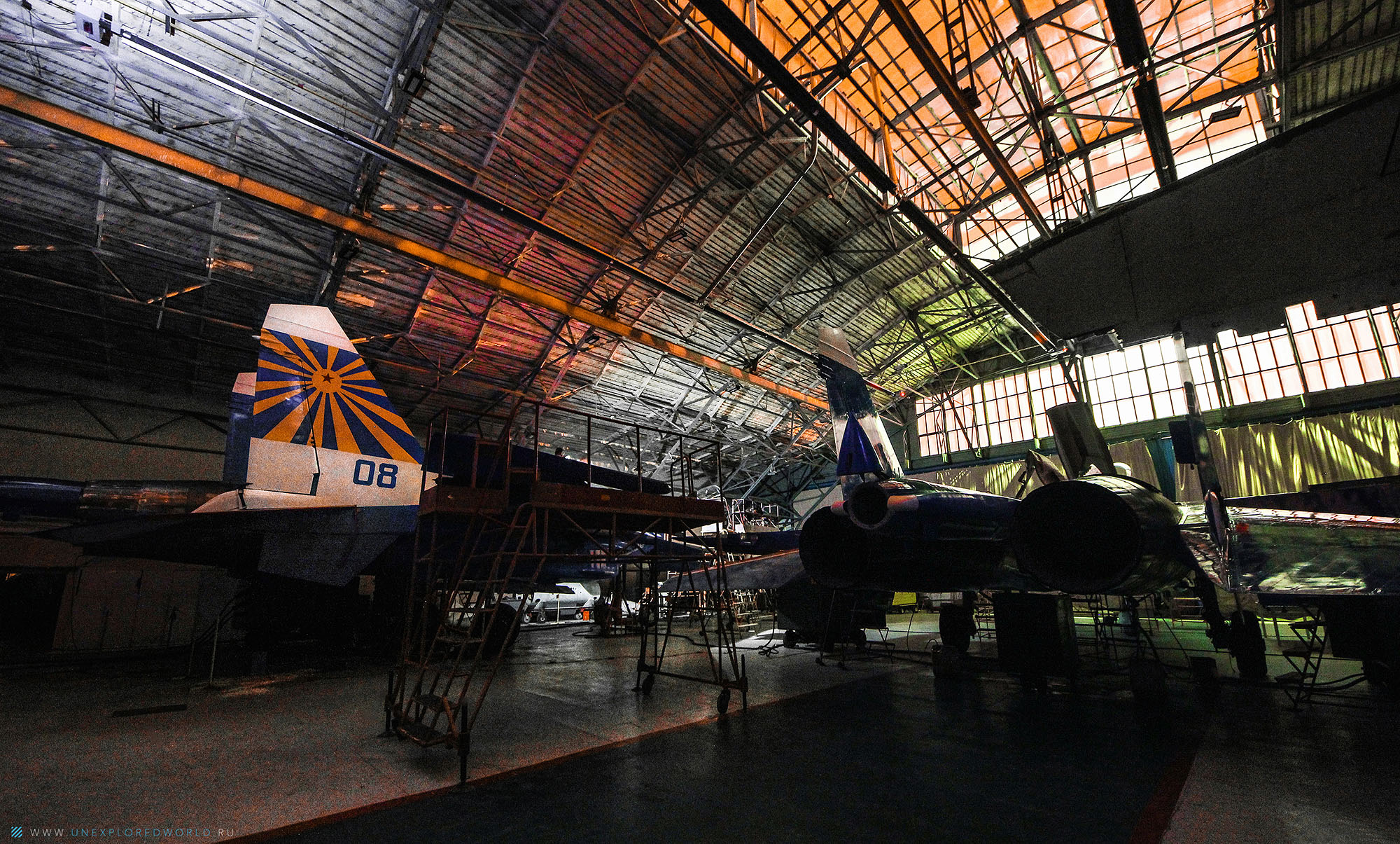 This light combined with the silence of the night makes being here incredibly atmospheric. 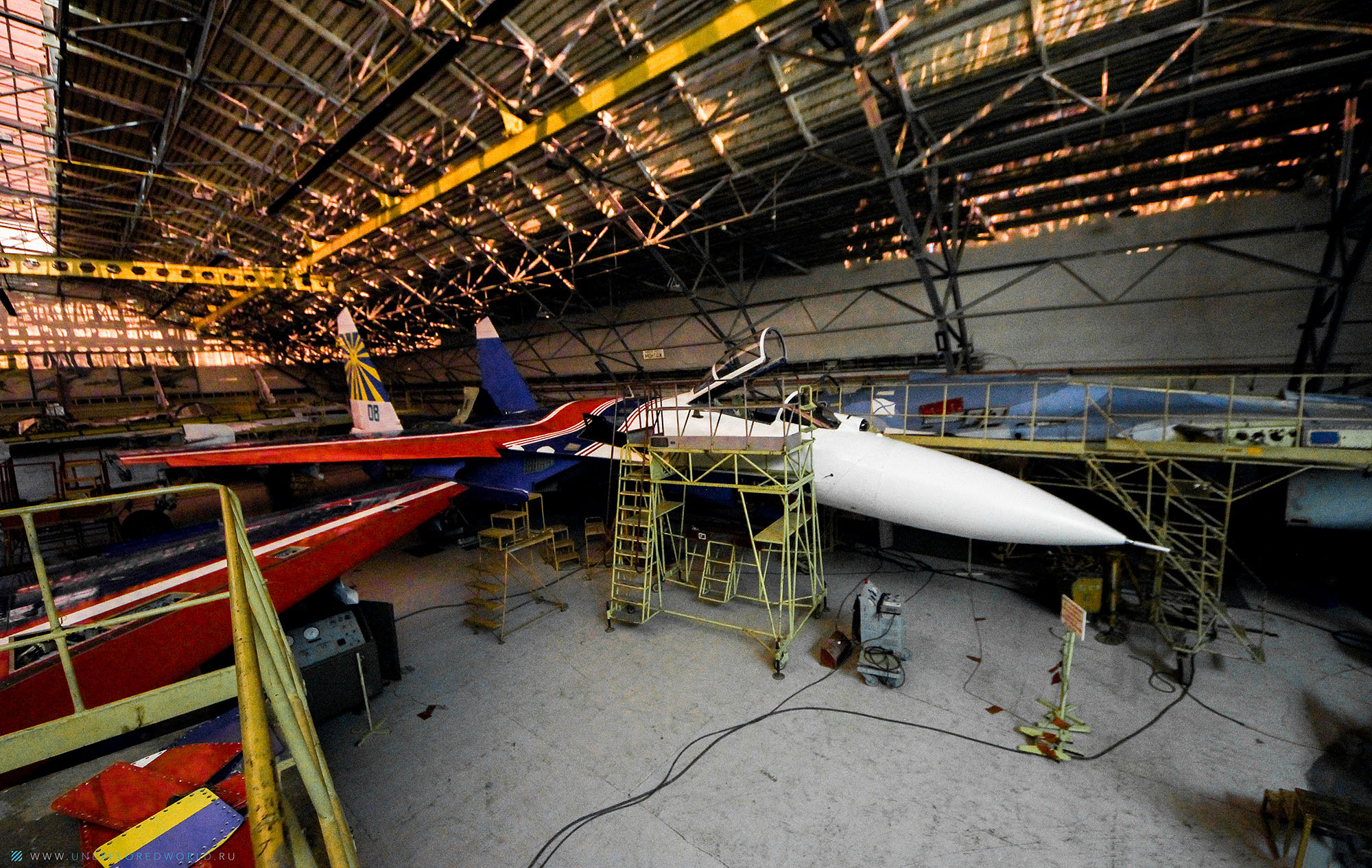 In between taking pictures, we sat down and stuck to combat vehicles. 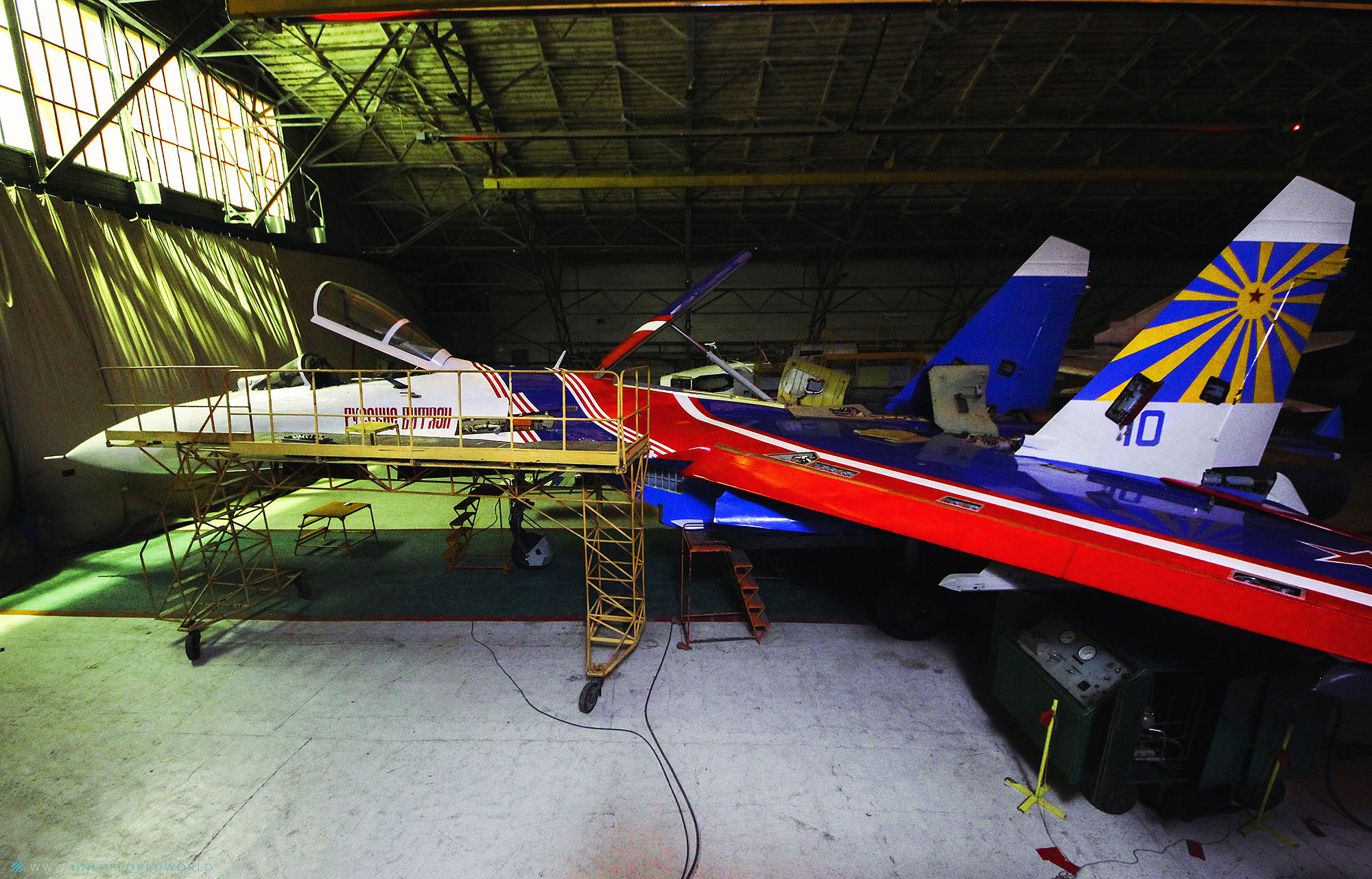 It is not always possible to relax in such places, since at any time employees of the plant can enter the shop and notice strangers. 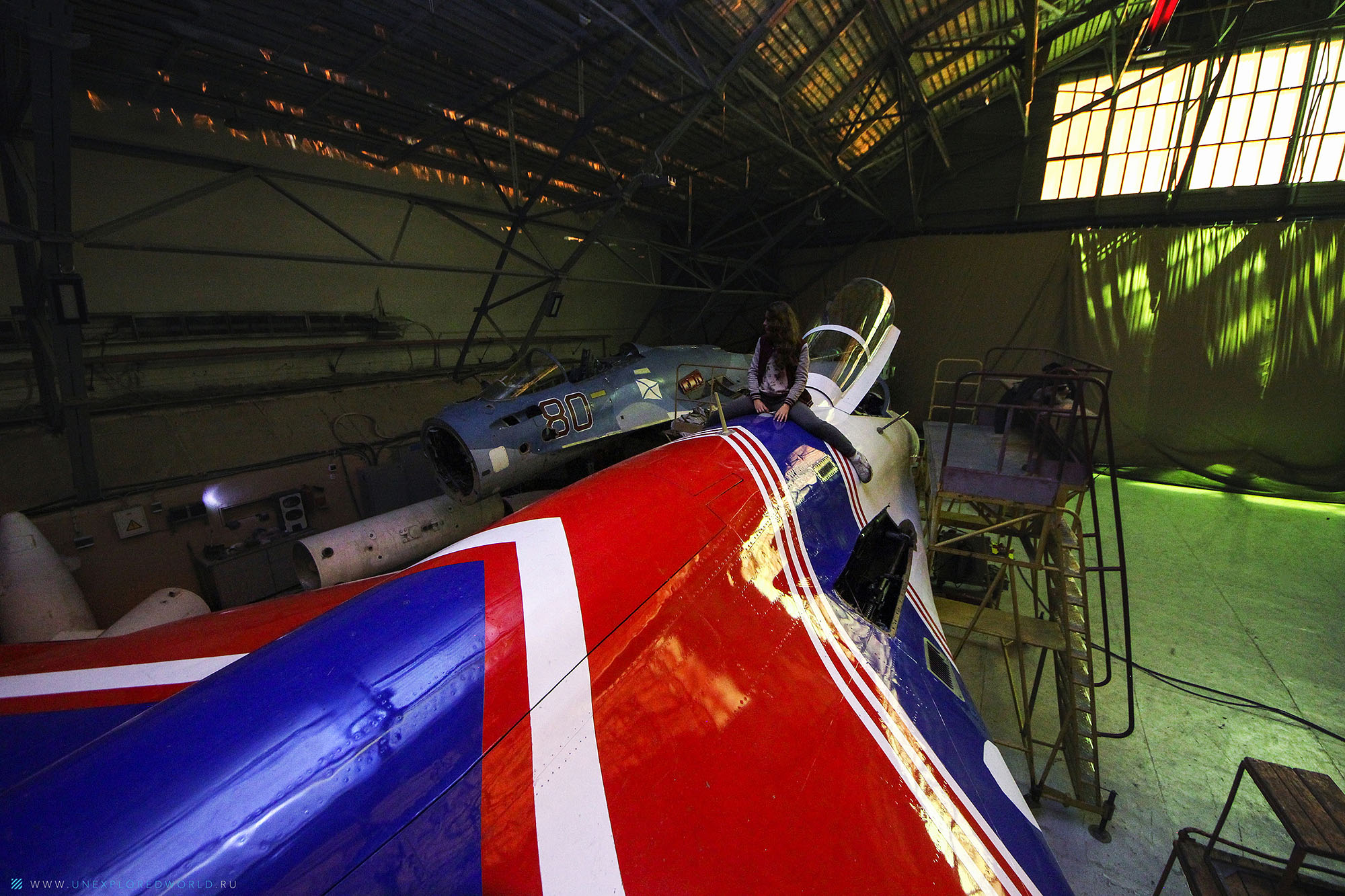 However, in our case, a cozy atmosphere reigned around to the depths of the soul, forcing everyone to forget that we are not at home, but at a party. Moreover, without an invitation. 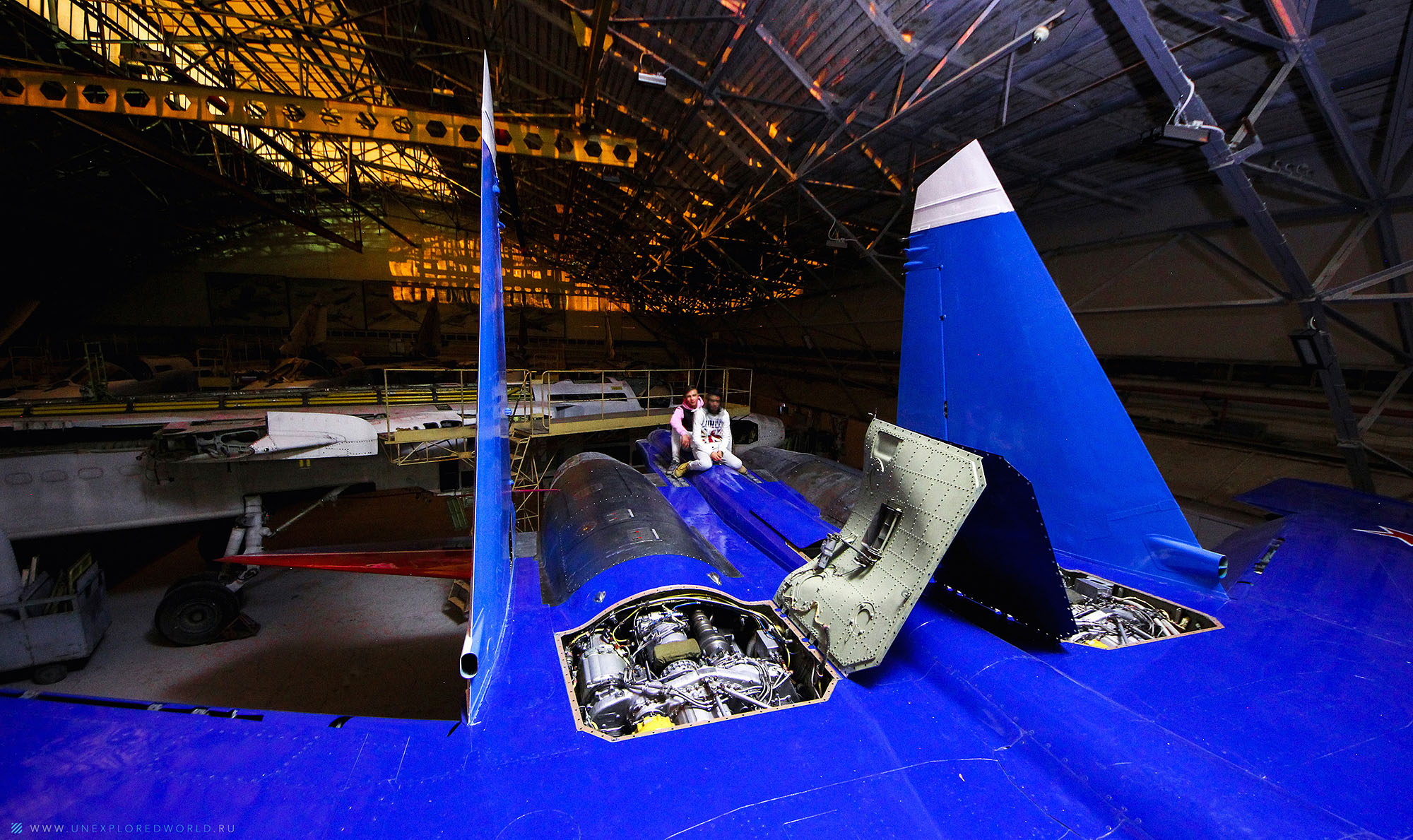 Some parts of the airplane body look so thin that it becomes incomprehensible how the aircraft can reach twice the speed of sound without losing the rudders. 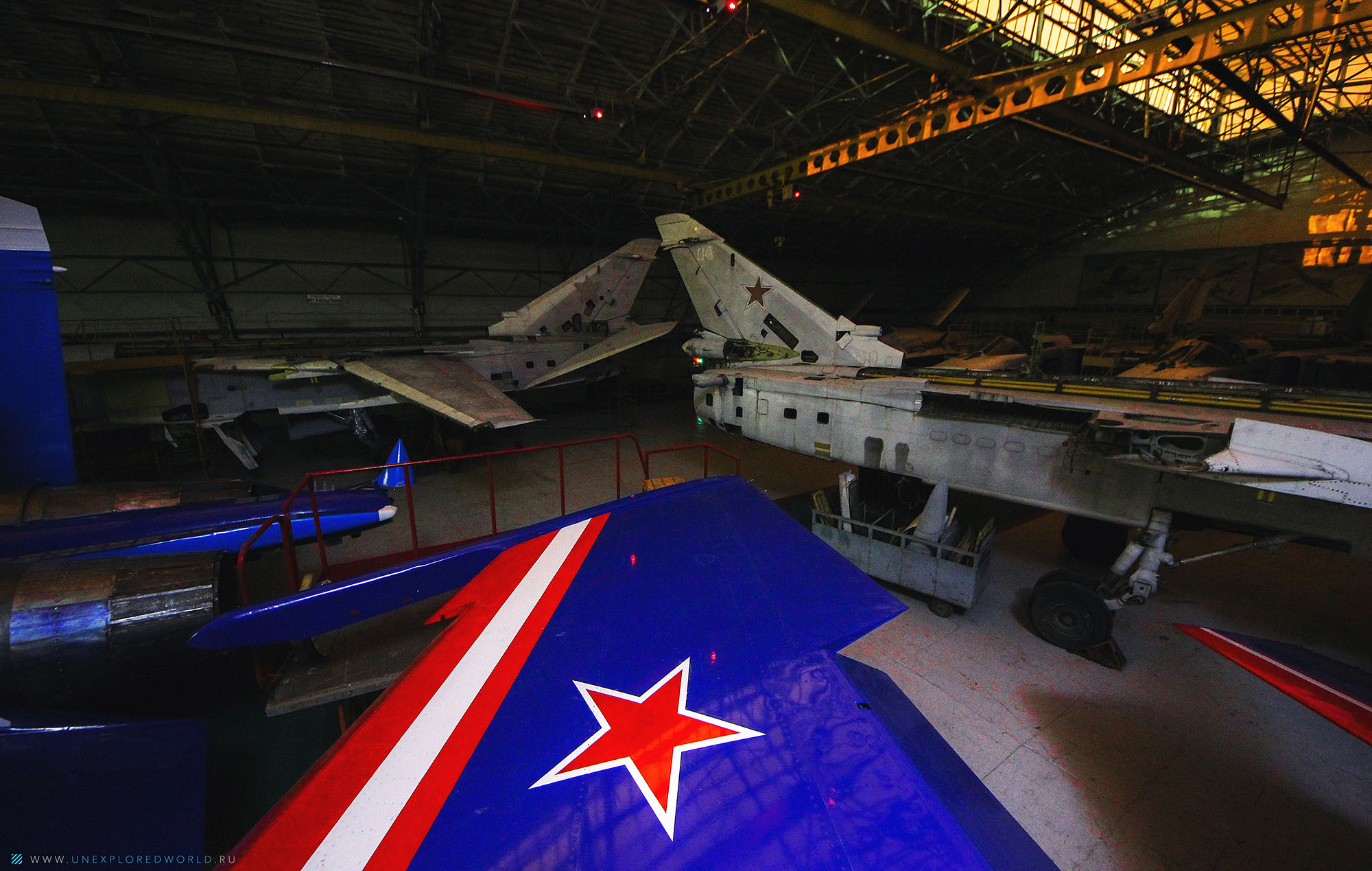 We moved around the planes very carefully so as not to touch or damage anything. 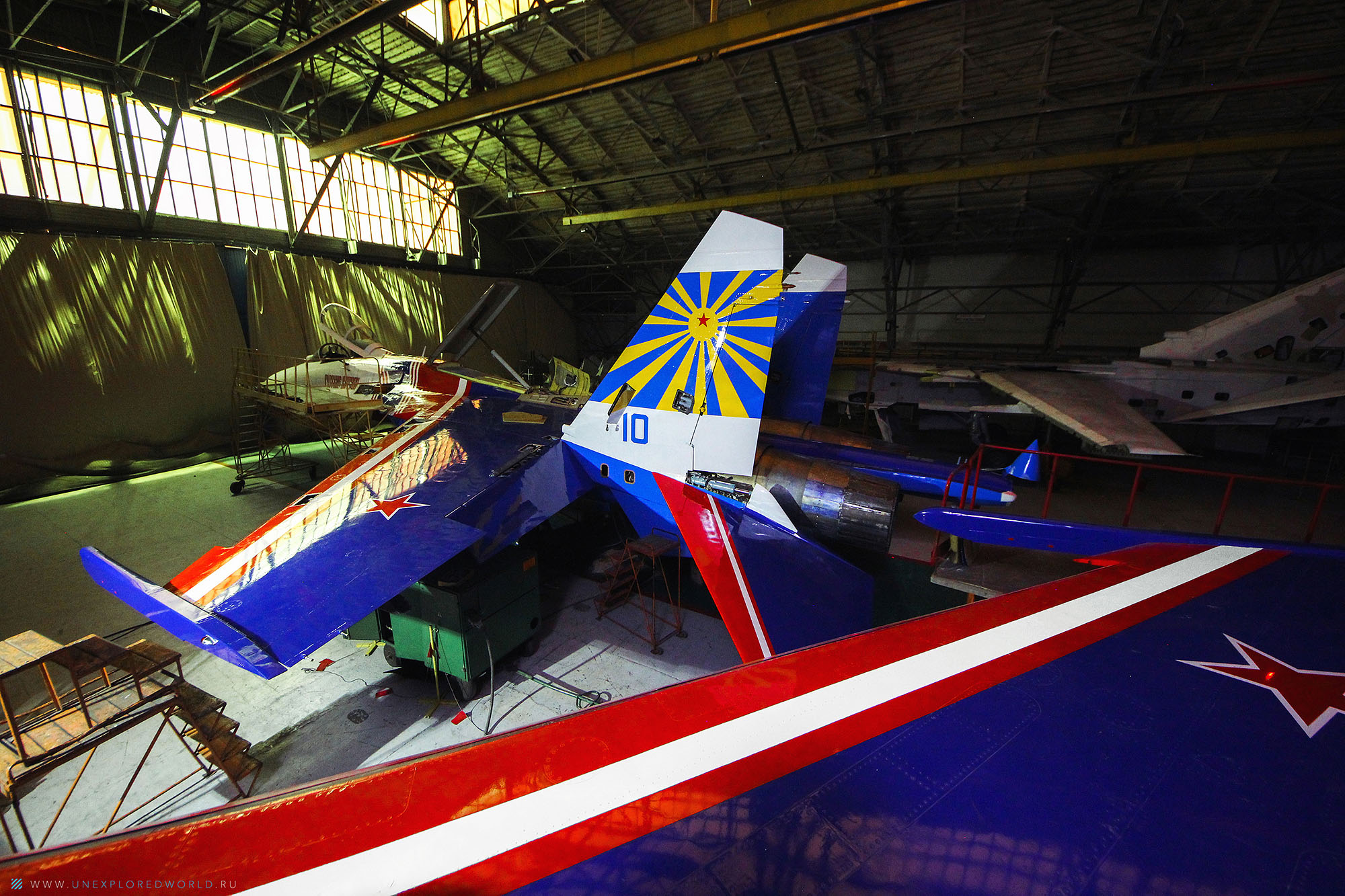 During the shooting of the photo below, a rather strange episode occurred. At about 3 am, our team heard the creak of a door opening and muffled footsteps. It is noteworthy that it was at this moment that all the uninvited guests lay lazily flat on the planes. For this reason, they did not think of anything clearer than to rush and hide in the cockpit. But only the tired guys have forgotten about something: in the cockpit one person can hardly fit, where is it up to two or three, and even with cameras? In general, it turned out not very convenient, but extremely funny. 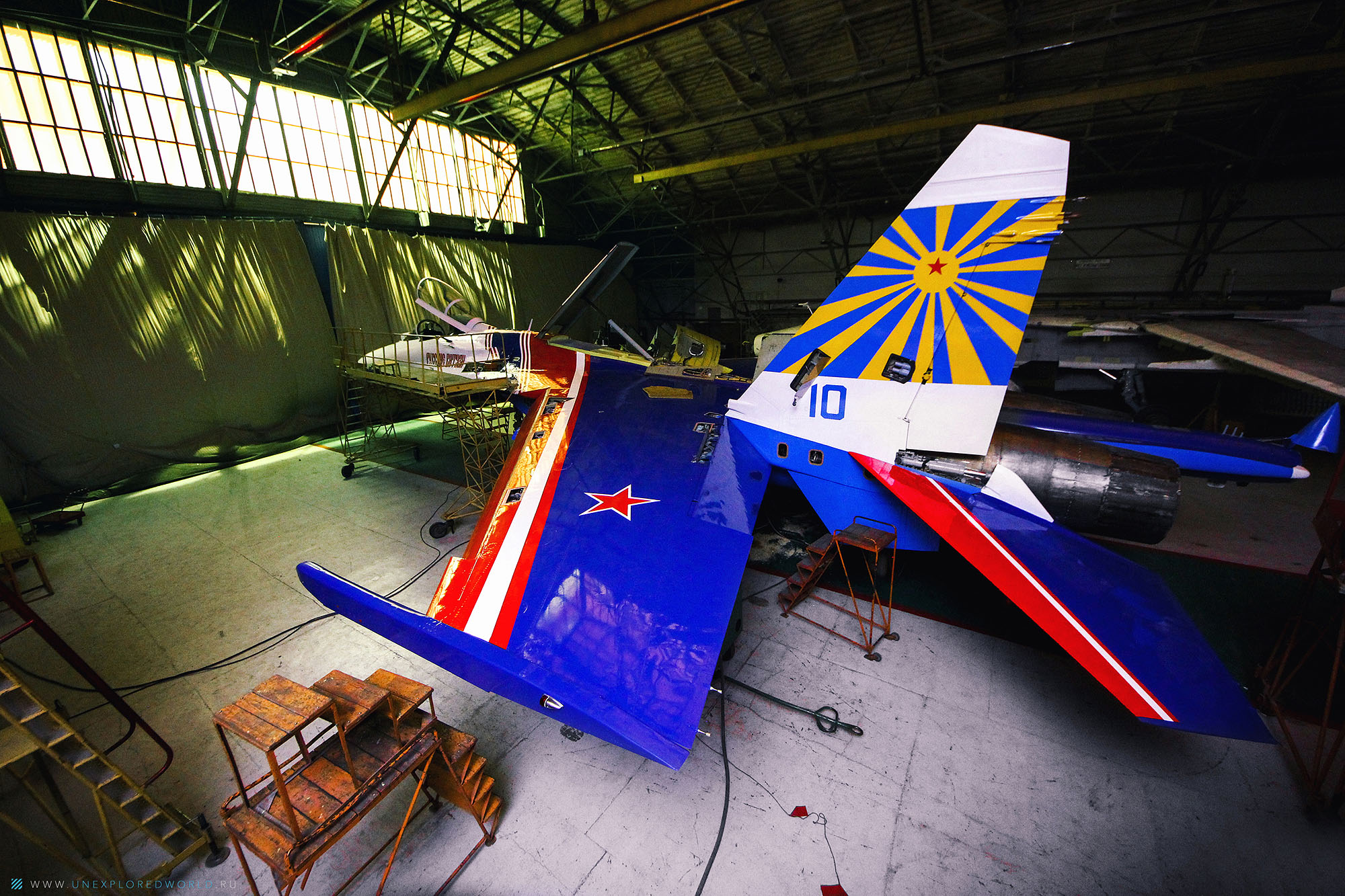 A human body entered the workshop, approached the curtains hanging at the hangar gates, turned around and said uncertainly: "Who-who is here?" To be honest, at this moment everyone could hardly restrain themselves so as not to laugh. And laughing fighters would hardly have inspired our guest. After standing for about 10 seconds and without waiting for an answer, the character rushed out of the workshop in an accelerated mode. 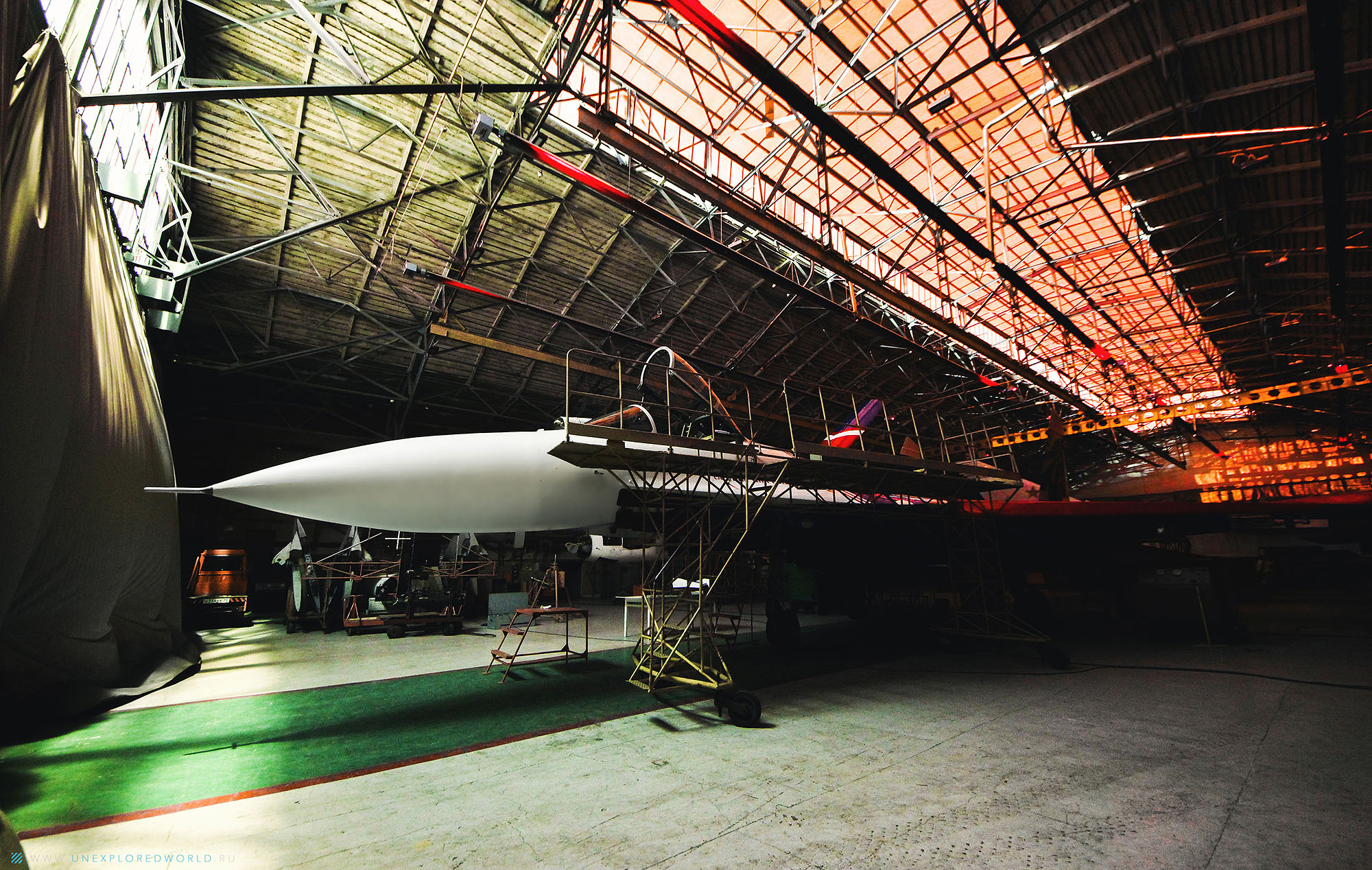 The moral of this fable is that: a) it was necessary to shine less flashlights; b) you need to leave the factory as soon as possible, until two or more strange characters have returned here. 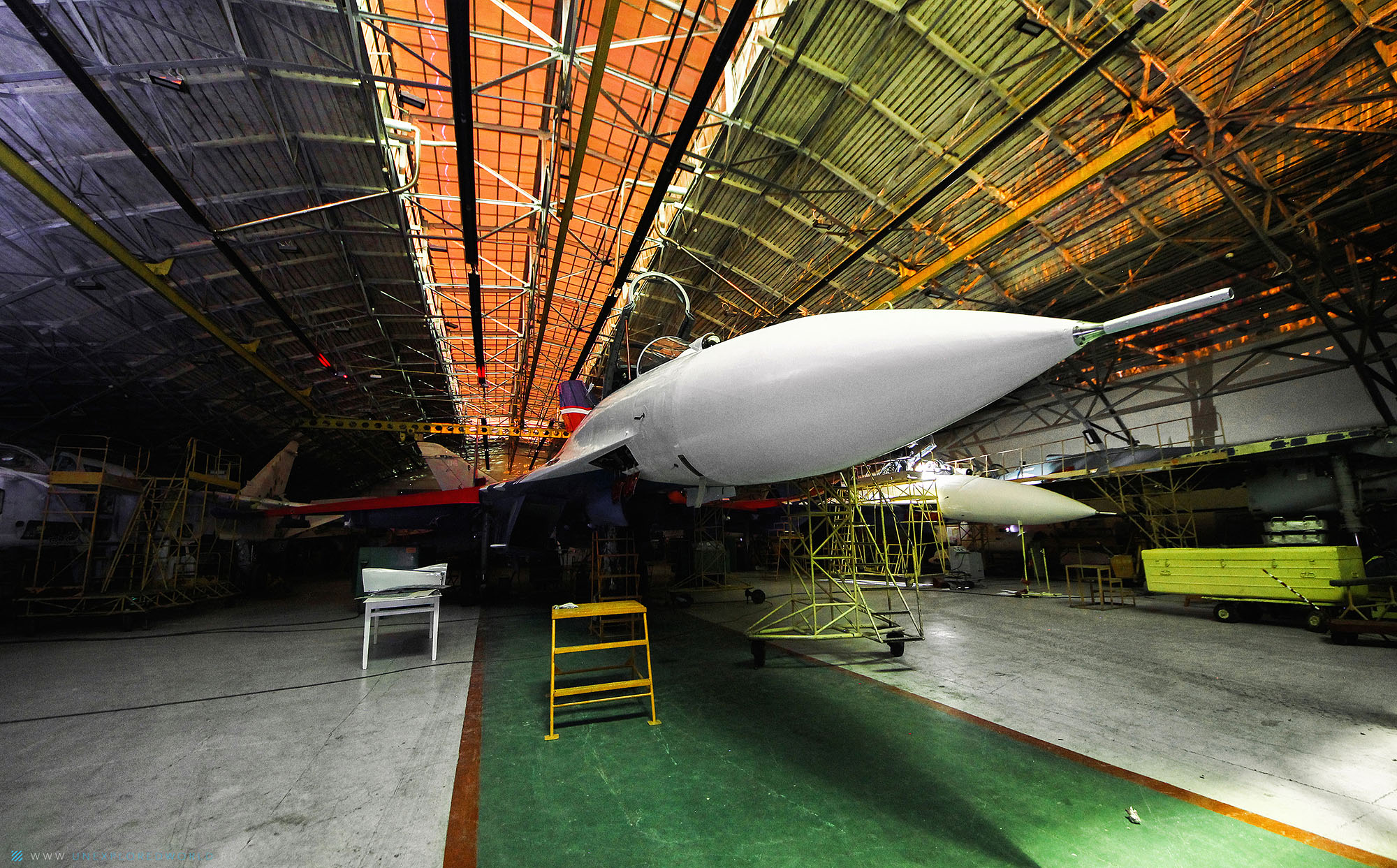 Quickly collecting all the things that we had, the guys checked that no one was waiting for them at the exit from the workshop, and rushed to the perimeter of the fence. When everyone overcame the last perimeter, the team was overwhelmed by this, painfully familiar, but every time special, a feeling of joy and a slight dizziness from adventure. 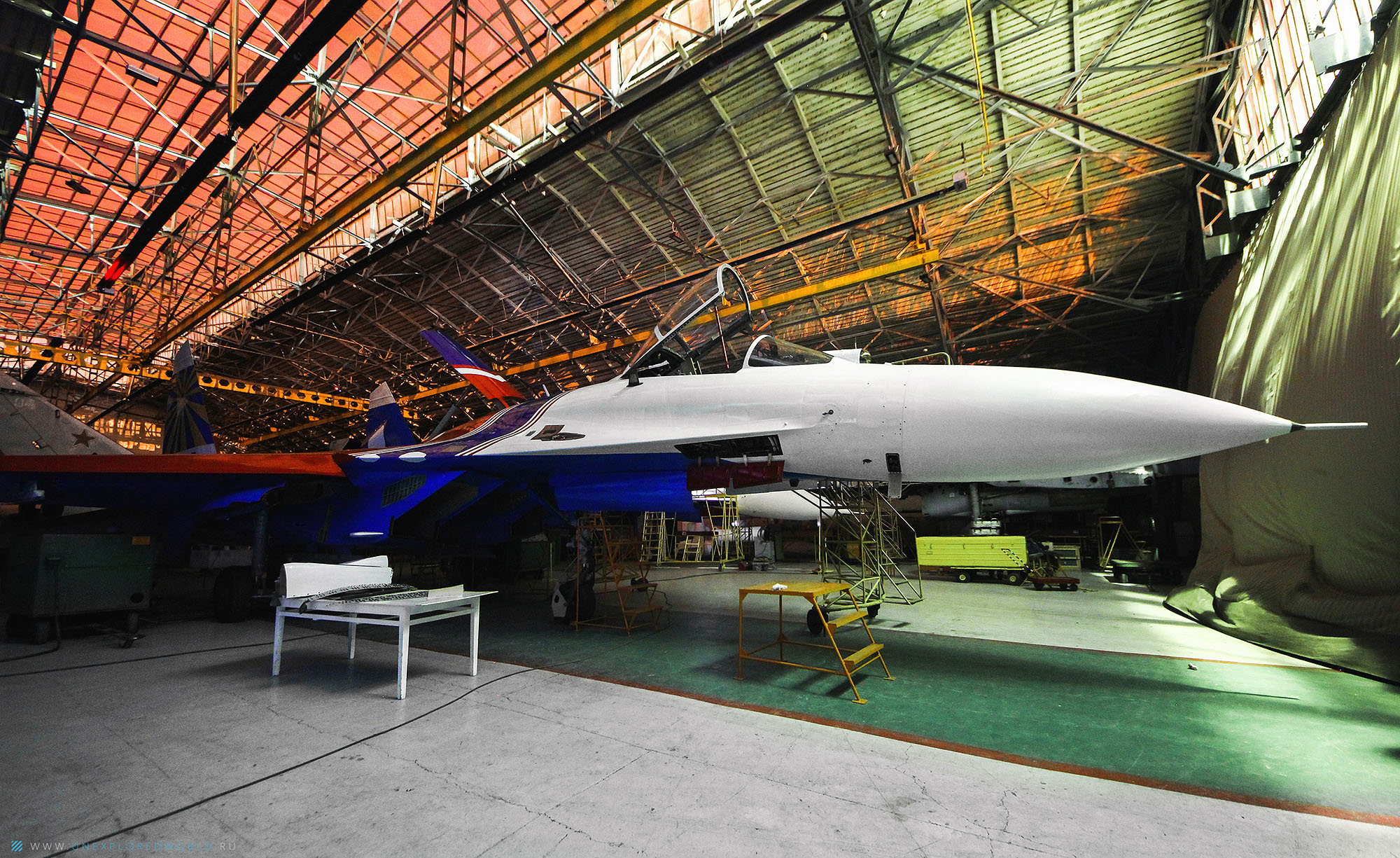 That's all. Thank you for the attention! Yours sincerely, UnexploredWorldTeam.

Subscribe to us on social networks and be the first to know about new reports!